From tools to strategy to tactics, digital marketing hits a lot of disciplines, making the field feel all over the map if you’re not familiar with it.

But understanding digital marketing isn’t just about knowing specific pieces of adtech or platforms like email or social media—it’s about having an idea of how all these things fit together into one broader framework.

So with the big picture of marketing as the goalpost, here are 17 terms you’ll probably run into if you’re working as a digital marketer, especially in associations.

The protection of a brand against dangerous affiliations, such as questionable content online. A particular issue after the 2016 election, brand safety may lead to the use of blacklists or whitelists to ensure that digital advertising appears only on certain websites with approved content.

An approach to digital marketing using targeted content, often for search engines or social media outlets, that promotes concepts related to a brand’s goals or messaging. Different theories abound about best practices in this form of content outreach, but many agree that it has largely outpaced the press release as the primary brand marketing tool on the internet.

The price of advertising as calculated by the number of impressions (“mille” being a French and Italian term for “thousand”). Often used in advertising campaigns, CPM became an important measure on the web because it could be directly tracked, whereas in the past (through methods such as broadcasting or print advertising) it was usually implied.

This term has a number of variants, such as cost per impression.

A microcosm of individuals such as video creators, social media personalities, and newsletter authors who have built a homegrown approach to media creation outside of the context of corporate media.

Participants in the creator economy may use tools such as Patreon or Substack to promote their work. They’re considered a part of influencer marketing, a key trend in social media.

A piece of digital data, originally used during the days of the early web, that stores identifiable information about specific users. For decades, cookies have proved a fundamental element of advertising technology, but their use, especially across servers, has gained a controversial reputation. As a result, some web browsers (such as Apple’s Safari) limit their use entirely.

Despite facing numerous reputational knocks over the years, the cookie has largely survived for lack of a better tool. A recent Google attempt called Federated Learning of Cohorts (FLoC) has struggled to win wide support; as a result, Google has delayed its plan to end its use of cookies.

This term, used in both marketing and sales, references a potential customer or member’s position in the marketing process. Content marketing is often tethered directly to the funnel.

Introductory information is found near the top of the funnel, while more in-depth information is targeted at those who are more deeply engaged, or “mid-funnel.” The bottom of the funnel represents the final stage of the purchasing or membership process.

A competing approach is lifecycle marketing, a more sophisticated version of the funnel that ties the marketing process to experiences.

The use of a high-profile persona to promote a product or service—an increasingly popular model in the age of social media. A classic example is Casey Neistat, a popular video creator who has used his large audience base to promote products for companies such as Nike in unexpected ways.

A related term is microinfluencer, which refers to an influencer who may not be broadly known but has a cult of popularity in a niche space such as an association. A microinfluencer, according to the Association of National Advertisers, has between 10,000 and 50,000 followers on social media.

A programming language that is often used for basic marketing technologies such as analytics and retargeting. These use cases are fundamental to many marketing approaches, but they can raise data privacy and security issues—and can also weigh down the website. Many users take steps to block these scripts with an ad blocker.

A principal signifier of how a marketing initiative is working, based on targets set by the organization when launching a specific initiative. As Investopedia notes, KPIs are often tied to measures such as profit, engagement, and overall operational performance.

Technical tools of varying sophistication that allow for marketing strategies to be run automatically, allowing personnel to manage campaigns from a higher level. Two examples of marketing automation: a drip campaign and social media management software.

The percentage of users who have opened up a specific email. For years the primary tracker of email engagement, this long-standing tool has faced challenges in recent months because of Mail Privacy Protection, a setting available in iOS that limits the ability of marketers to track email usage.

A related term, click-to-open rate, references the click rate of links among those who have opened the email.

A form of advertising, often associated with search engines and banner advertising, in which an advertiser pays based on how many people click on a link, rather than paying a flat fee. This was a revolutionary concept in the early internet era because it often allowed for more tailored campaigns than might have been allowed through billboards and television advertising.

Advertising that is placed on a website without human input, based on a set of predetermined rules. This basic concept can be tailored in multiple ways, allowing advertisers to target specific types of users and set basic rules for how advertising should or should not appear online.

A Gmail tab that is often dominated by marketing emails. This is a controversial place for many marketers, who often believe that people are much less likely to see the message if it lands anywhere other than the primary inbox.

But it’s not all bad, as Campaign Monitor notes: “Read rates do have a slight drop-off when moving from the inbox to the Promotions tab, but there are about half the spam complaints in the Promotions tabs than in the primary tab.”

Advertising that targets a specific user more than once, often as a result of a prior sign of engagement. This technique—although somewhat controversial on platforms such as Facebook—is useful for many advertisers, as it allows them to capture the attention of users who are most likely interested in using or purchasing promoted tools.

An image, usually a blank or single-color image, that is placed on a webpage to analyze who is visiting the site. This is one of the primary ways that marketers track impressions or clicks. It’s more flexible than using a tool such as a script or a cookie, as it can be used in places such as email marketing, though it is less interactive than a script.

Sat Dec 4 , 2021
The Omicron variant has been linked to a substantial rise in coronavirus reinfections in South Africa compared with previous waves, according to the first detailed study into the heavily mutated strain that has sparked global alarm. “Analysis of routine surveillance data from South Africa suggests that, in contrast to the […] 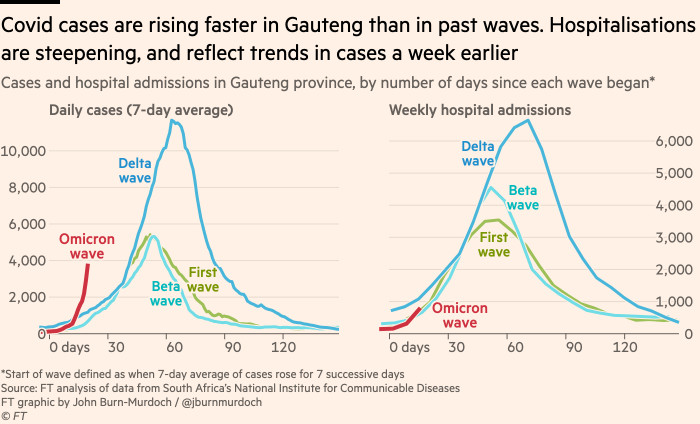