A downturn in global stocks appears to be spilling over into the nascent crypto market, with a bout of weekend selling erupting into a mini-flash crash in prices of bitcoin and other notable digital assets.

was trading at $49,112, down slightly on the day. But that followed a harrowing day of trading Saturday, with bitcoin slumping to around $42,000 on some exchanges, tumbling nearly 30% peak-to-trough on a 24-hour basis.

NYDIG, a technology and financial services firm dedicated to bitcoin, said that the decline was even more severe for some offshore platforms such as Huobi, where bitcoin briefly touched a 24-hour nadir at $28,800 on Saturday.

That is a gut-wrenching fall, that may even leave some veteran crypto bulls feeling a touch queasy.

The drop also meant that the total market value of the crypto universe, as tracked by CoinMarketCap.com, shed nearly $400 billion to around $2 trillion, before recovering to around $2.2 trillion.

So what precipitated the drop? It isn’t 100% clear.

The analysts at CoinDesk blamed at least some of the downturn on trading in crypto derivatives, amplified by growing concerns about the prospects for tighter financial conditions that is forcing a repricing of assets that are sensitive to potentially rising borrowing costs.

“The decline was likely in part technically-driven, exacerbated by the derivatives market, and not helped by the downside momentum behind high-growth stocks on Friday, to which bitcoin has been positively correlated,” wrote Katie Stockton of Fairlead Strategies, in a Saturday morning note.

NYDIG estimates that $1.1 billion of leveraged bitcoin positions and $2.5 billion of crypto leveraged positions (including bitcoin) have been liquidated in the past 24 hours, representing the largest such notional liquidation since Sept. 7.

Bitcoin ‘s values have been softening for weeks but declines for other risky assets have been accelerating with the Federal Reserve indicating it might increase the pace at which it is withdrawing the market support provided in the past 18 months during the coronavirus pandemic as it turns its attention to restraining inflation. This so-called “tapering” of bond purchases has investors believing that interest-rates hikes are next on the central bank’s agenda in 2022.

Some believe that bitcoin and other digital assets aren’t correlated with the prices of other assets, which has been heralded as one of the more appealing features of bitcoin and its ilk. However, crypto has been trading more in step with traditional stocks and bonds recently partly because of the prevailing low interest-rate environment and if that changes then the values of a host of assets, also factoring in inflation, must be reassessed.

In traditional markets, that repricing has seen technology shares underperform as they are the most sensitive to shifts in rates. The tech-laden Nasdaq Composite Index
COMP,

stands 6% from its Nov. 19 peak, with declines gathering steam over the past week, amid fears about the economic impact of the coronavirus omicron variant and concerns about the Fed’s monetary policy plans.

Meanwhile, the Dow Jones Industrial Average
DJIA,
,
is half way toward a correction, and is off more than 5% from its Nov. 8 record close, and the S&P 500 index
SPX,

is 3.5% from its all-time high close put in on Nov. 18, while the small-capitalization Russell 2000 index fell into correction, commonly defined as a fall of at least 10% from a recent peak, on Thursday.

On Twitter, Michael Novogratz, founder and Chief Executive of crypto firm Galaxy Digital, tweeted that the backdrop in markets was a “perfect storm,” perhaps referring to the tumble in broader markets, omicron fears and hawkish comments from the Federal Reserve.

Fairlead’s Stockton says that if the downturn persists, after bitcoin broke through an area of support at around $53,000, it would qualify as a more troubling technical breakdown of the uptrend in the asset’s price.

“ Momentum has weakened to the extent that there is a pending weekly MACD ‘sell’ signal that would be solidified upon a confirmed breakdown tomorrow, she wrote, referring to the Moving Average Convergence/Divergence, used by technical analysts as a gauge of momentum in an asset.

However, NYDIG suggested that they are seeing positive trends for bitcoin and crypto: “On our desk, we have seen two-way flows today with 84% of the flows being buys on our trading desk excluding tax loss harvesting trades,” the company wrote in a note on Saturday.

In other crypto, Ether
ETHUSD,

To be sure, crypto is one of the more volatile assets and is still in the phase of gaining credibility as a bona fide alternative asset.

Some crypto bulls, known for holding the investment long-term despite its tendency for wild swings, were making light of the Saturday slump such as this tweet from the Twitter account associated with Billy Markus, one of the founders of dogecoin
DOGEUSD,
,
which has become such a popular meme asset that it has been duplicated by other tokens such as Shiba Inu
SHIBUSD,
.

Tue Dec 7 , 2021
Laos will open a $6bn Chinese-built railway on Friday, the biggest public works project in its history, which analysts warn could expose the poor south-east Asian country to financial risk or political coercion from Beijing. The 414km line, which runs from Boten, near the Chinese border, to the capital Vientiane, has […] 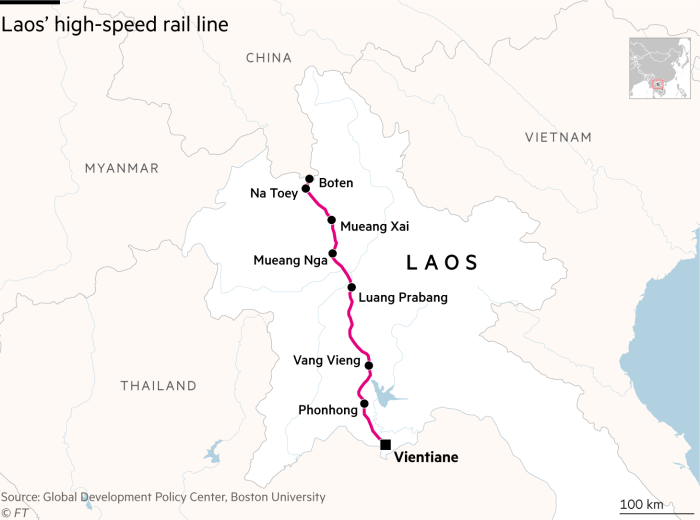