A cheap antidepressant reduces the risk of hospitalisation in Covid-19 outpatients that are at higher risk of severe disease, a large study has found.

Researchers in a peer-reviewed study published in The Lancet Global Health found that fluvoxamine, which is used to treat depression and obsessive-compulsive disorders, reduced the need for retention in a Covid emergency setting or transfer to another hospital.

It is the largest randomised trial to date to assess the effectiveness of the drug in Covid outpatients, and follows earlier promising evidence.

“Identifying inexpensive, widely available, and effective therapies against Covid-19 is . . . of great importance, and repurposing existing medications that are widely available and have well-understood safety profiles is of particular interest,” said Dr Edward Mills of McMaster University in Canada, co-principal investigator on the trial.

“Recent vaccination developments and campaigns have proved to be effective and important in reducing the number of new symptomatic cases, hospitalisations, and deaths due to Covid-19. However, Covid-19 still poses a risk to individuals in countries with low resources and limited access to vaccinations,” he said.

Of the 741 patients in Brazil who received 100mg of the drug twice a day, 79 required an extended stay in an emergency setting or hospitalisation, compared with 119 out of 756 who were given a placebo.

Penny Ward, a visiting professor in pharmaceutical medicine at King’s College London, said the results were “promising”, especially given the price and availability of the product.

However, she said the study had limitations, particularly concerning the impact on more severe outcomes. The level of protection afforded in breakthrough cases was uncertain because vaccinated patients were excluded from the trial, she added. 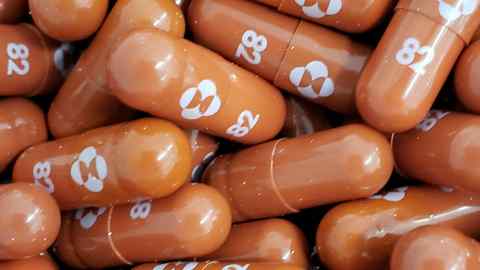 It is also unclear whether the drug has benefit for broader populations, including those without risk factors, said experts who were not involved in the study.

Fluvoxamine has a list price of about £17 in the UK, according to British National Formulary figures.

While the number of treatments available for Covid has increased since the pandemic emerged, most are expensive or difficult to make and administer, putting them beyond the reach of people in many parts of the world.

A number of repurposed drugs, including ivermectin and hydroxychloroquine, were initially believed to confer benefit but failed in rigorous trials. Other repurposed agents, such as Gilead Sciences’ intravenously administered antiviral remdesivir, offer limited benefit in the face of high prices. Dexamethasone, a steroid, is cheap and widely available but given later in the course of the disease.

Molnupiravir, an oral drug made by Merck which the company is making widely available through royalty-free licensing deals, has been hailed as a groundbreaking antiviral treatment since it is given orally and is easy to make.

Put some crypto in your portfolio but ‘handle it with care’

Thu Nov 4 , 2021
Bitcoin and other cryptocurrencies are volatile and have been viewed as risky by skeptics within Wall Street ranks and veteran investors. And yet, more are warming up to the notion of crypto as part of a diversified portfolio, given what’s being viewed as its technological staying power. Amy Arnott, a […]