As the U.S. and other Western powers line up to impose sanctions on Russia for its armed incursion into Ukraine, the looming economic penalties are likely to squeeze the energy giant’s economy.

However, there are questions about whether the booming cryptocurrency sector could allow oligarchs close to Russian President Vladimir Putin to skirt the effort to put the financial squeeze on Moscow, thanks to the anonymity and decentralization of digital tokens.

According to Capital Economics, targeted sanctions on key Russian financial and business sectors may shave 1-2% from the country’s gross domestic product (GDP). Yet a debate is brewing whether those actions are far-reaching enough to force Putin to pull back from his offensive, especially with Russia sitting on a substantial war chest fed by surging energy prices.

Separately, bitcoin and other digital coins could allow governments and non-government entities to benefit from peer-to-peer transactions, some say, regardless of whether the move to block Russia’s access to capital succeeds. According to at least one source, bitcoin donations are being funneled to Ukrainian forces as the crisis intensifies.

For years, state-sponsored cybercrime organizations, like North Korea’s hacking group Lazarus, have used financial technologies like crypto to reap hundreds of millions of dollars, diverted to the country’s nuclear and ballistic weapons programs.

But while the blockchain does facilitate easy transactions, crypto does have its limits in terms of illicit flows, according to Michael Parker, a former federal prosecutor.

“The concern that I would raise in thinking that maybe crypto would be the answer to evade these sanctions is that crypto leaves a digital thumbprint via the blockchain,” Parker, who heads the anti-money laundering and sanctions practice at D.C.-based Ferrari & Associates, told Yahoo Finance in an interview.

With the sector cleaning up its act and regulators cracking down on illegal activity, analytic tools have evolved to make blockchain transactions traceable, the attorney noted.

In recent months, regulators and prosecutors have cracked down crypto-related fraud. The most recent example is the U.S. Department of Justice’s seizure of $3.6 billion in bitcoin tied to the 2016 hack of the cryptocurrency exchange, Bitfinex. The news drew headlines and captured the public’s imagination, amid colorful details of the accused millennial couple that struggled to offload the funds.

Foreign illicit actors have a clear advantage over their domestic counterparts, but some argue the impact of using cryptocurrency to blunt U.S. sanctions would likely be minimal.

“Crypto is not powering day-to-day commerce,” Daniel Garrie, co-founder of cyber security-focused legal firm Law and Forensics and editor-in-chief of the Journal of Law and Cyber Warfare, told Yahoo Finance.

The size and scale of Russia’s economy exceeds that of a pariah state like North Korea, whose is all but relegated to the darker corners of the global finance system.

Still, Garrie argued that “cryptocurrency is expected to be used by both sides of the conflict” and that rising cyber attacks by Russia against the Ukraine and its allies could position regulators “to further inject themselves into the stream of crypto commerce.”

In the past two days, the Ukrainian military has received over $4 million in cryptocurrency donations from volunteer groups and NGOs according to data tracked by the blockchain analysis firm, Elliptic.

But given its market size, the role cryptocurrency can play in Russian commerce remains dwarfed by the U.S. dollar, the world’s premier reserve currency.

According to Ari Redbord, head of legal and government affairs with blockchain analysis firm TRM Labs, “sanctions are predicated on the hegemony of the U.S. dollar. Most banks need access to U.S. dollars and cutting them off can be debilitating for an economy. It can be a death sentence to foreign banks.”

The dollar’s international dominance, where trillions a day change hands, overtops crypto market volumes. Meanwhile, Russia accounts for 11.2% of Bitcoin’s total hashrate, according to data from the University of Cambridge.

At a relative low in September of last year, average daily volume for the U.S. dollar in exchange traded futures and options sat at $3.9 trillion during September 2021, according to the Bank of International Settlements.

Given the level of cyber warfare already seen in the Ukrainian conflict, in addition to sanctions, Redford suggested crypto will still likely factor into the armed struggle in a way that hasn’t yet been witnessed — especially if Russia is expelled from the Society for Worldwide Interbank Financial Telecommunications (SWIFT). The international payment system is a linchpin of the global financial network, and blocking Russia could be devastating for its economy.

“Its how you move funds on the digital battlefield,” Redford added.

Sun Feb 27 , 2022
The helicopter-led attack by Russian paratroopers on the Hostomel airfield north of Kyiv on day one of the invasion started an operation whose success could have significantly boosted Moscow’s hope of seizing control of Kyiv in a lightning assault. But its difficulties in securing the heavily strategic runway underscored both […] 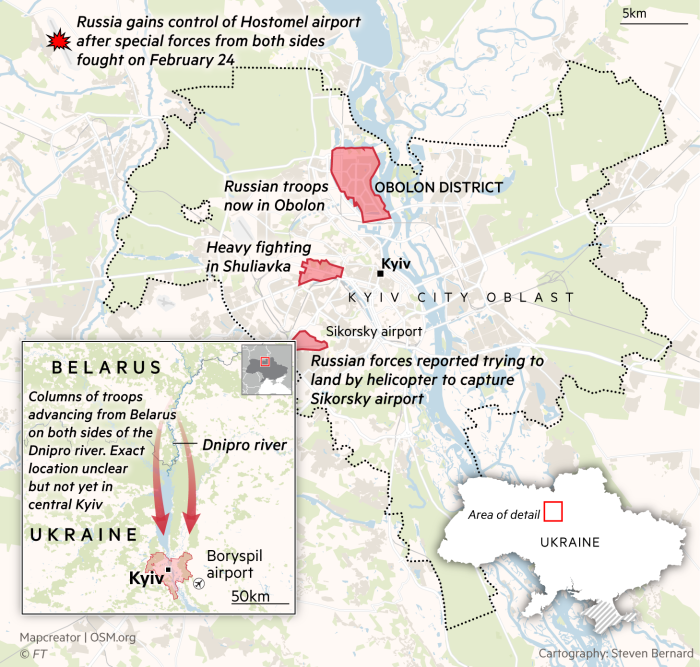