Scotland’s relatively cautious approach to coronavirus policy had an effect on public behaviour last year, including encouraging the greater use of masks, but did not stop death rates climbing above those of England during the Delta and Omicron variant waves, Financial Times analysis of official data shows.

Scotland continued to require the use of face coverings in public places last summer and introduced vaccine passports in the autumn, yet registered higher per capita deaths for much of the period compared with England, where such policies were not imposed.

The higher Scottish death rates through the autumn and in January will fuel fierce debate over the merits of the different approaches taken across the UK during the pandemic.

The devolved administrations in Scotland, Wales and Northern Ireland have consistently been more cautious about easing coronavirus restrictions and guidance than the UK government, which controls health policy for England.

However, official data show per capita deaths where coronavirus was mentioned on the death certificate actually hit higher levels in Scotland than England in January.

An FT analysis of data compiled by YouGov suggests Sturgeon’s more cautious approach had a significant impact on public behaviour last year, particularly in the months after the UK prime minister declared July 19 coronavirus “freedom day” and lifted the legal requirements for face coverings in public places in England.

Experts caution that it is extremely difficult to compare the effect of policies on the course of the pandemic even between nations as closely matched socially and economically as Scotland and England.

The differences between the coronavirus policies of Westminster and the devolved administrations have also mainly been matters of detail, timing and tone, rather than of fundamental principle.

However, Linda Bauld, professor of public health at Edinburgh university, said comparisons of data north and south of the Scottish border might yield important lessons.

A late summer surge in cases in Scotland in 2021, more than a year into the pandemic, fed relatively high death rates through the autumn.

But Bauld warned against interpreting the relatively high recent death rates in Scotland as showing a more relaxed policy would have been better.

Mortality and hospitalisation rates were likely to have been increased by longstanding relatively high rates of underlying ill-health in Scotland, she said, particularly in areas of high social and economic deprivation.

“Given the more vulnerable . . . and marginally older population, we would have fared even worse during recent months had we not imposed stronger protective measures,” Bauld said.

In a possible illustration of the vulnerability of Scottish Covid patients, the higher per capita deaths recorded in January came despite lower estimated overall infections and fewer hospitalisations compared with England.

Recent increases in Scottish Covid deaths might be explained simply by the fact that fewer Scots were infected and killed by coronavirus in previous waves, leaving more vulnerable people at risk.

“If you’ve had lower levels [of cases and deaths] in previous waves, then it does make sense that you’re likely to have higher levels in future waves because a lower proportion of the population will be immune,” said Andrew Hayward, professor of infectious disease epidemiology at University College London.

While death rates in Scotland have been higher than England recently, the huge impact of vaccines in reducing the severity of Covid-19 infection for most people has meant that far fewer have died in both nations than in previous waves.

From the beginning of the pandemic in early 2020 to January 28 2022, there were 2,668 deaths per million people in England where coronavirus was mentioned on the death certificate compared with 2,315 in Scotland.

However, the reduced severity of the disease to the vaccinated also changes the risk calculus of public health policy, and is fuelling resistance to continued restrictions and requirements for the use of face masks.

For her part, Sturgeon has dismissed criticism that she overreacted to the Omicron wave and made clear her reluctance to match plans by Johnson to effectively scrap remaining restrictions this month.

On Wednesday, the UK prime minister, announced plans to end the legal requirement to self-isolate after a positive Covid-19 test in England. 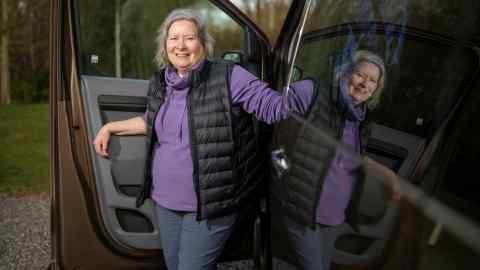 It was an announcement that drew praise from many in his governing Conservative party who believe a more relaxed approach has been vindicated by an Omicron wave that caused fewer deaths and serious illness across the UK than many analysts had originally feared.

But Devi Sridhar, professor of global public health at Edinburgh university, said Sturgeon was right to argue that policymakers sometimes had to act before full evidence was available.

“If we have learned anything through this pandemic it is that it is better to be cautious,” Sridhar said.

Tue Feb 15 , 2022
Stock market regulator Securities and Exchange Board of India (SEBI) restrained Reliance Home Finance, it’s promotor Anil Ambani and three others from buying, selling or dealing in securities, either directly or indirectly, in any manner whatsoever until further orders. Anil Ambani and others are also […]