Italy’s prime minister Mario Draghi has admitted that Europe has few tools to deter Russia from a military confrontation with Ukraine, as tension mounts over Moscow’s intentions towards Kyiv.

Speaking at an end-of-year press conference in Rome, Draghi drew attention to the EU’s lack of its own military force and also pointed to weaknesses in any sanctions that might be directed at the Kremlin.

“Do we have missiles, ships, cannons, armies? At the moment we don’t and at the moment Nato has different strategic priorities.”

Draghi said economic sanctions would be the only possible means of “deterrence” but Europe was not in a position to give up Russian gas supplies. “It would not be the right moment,” he said.

The EU is already feeling the pinch from a surge in energy prices, partly caused by unusually low supplies of Russian gas ahead of the winter.

Moscow has about 100,000 troops on its border with Ukraine, sparking western fears that Russia is planning a possible invasion. Russia’s President Vladimir Putin has spoken of “serious concern” at Nato’s own deployments and warned of “appropriate” military action if the western military alliance continues to expand toward his country’s borders

This month Russia published security demands, including a call for Nato to rule out membership for Ukraine and seek Moscow’s permission for deployments in former Soviet countries that are now members.

The US has said some of the demands are unacceptable but plans bilateral talks in January with Moscow.

Draghi said Europe needed to maintain engagement with Putin, who talked this week to Emmanuel Macron, president of France, and to Olaf Scholz, German’s new chancellor. In Wednesday’s press conference, Draghi also hinted his stint as Italy’s prime minister may be coming to an end, saying his administration had hit the targets it committed to with the EU.

“Our work can go on regardless of who is at the helm,” Draghi told the news conference in Rome. “As long as there is a wide convergence between parties as there is now.”

The former European Central Bank president is widely seen as a leading candidate to take over as Italy’s president from Sergio Mattarella, whose seven-year term is due to end early in 2022. Draghi’s statements on Tuesday were the strongest signal he has given about his willingness to assume the presidency if lawmakers choose him.

The succession is being closely watched outside Italy because of Draghi’s role at the head of a national unity government that has stabilised the economy and shored up investor confidence.

If he were to move to the presidency, some observers fear a period of renewed political turmoil at a time when Italy is trying to recover from the Covid-19 pandemic, with hundreds of billions of euros of EU grants and loans at stake. 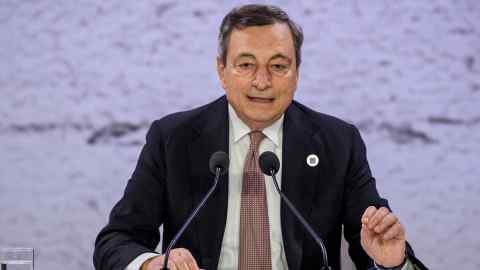 The Italian constitution does not envisage a second term for a sitting president, although this has happened before at the height of the European debt crisis. Mattarella, whose popularity has increased significantly over the course of the past four years, has publicly ruled out the possibility that he will stay on for another term.

“This government has created the conditions for the work to continue, regardless of who is [at the helm],” Draghi told the press conference. “My personal destiny does not matter. I have no particular ambitions, I am a grandfather at the service of public institutions,” he added.

Draghi’s election to the presidency would potentially trigger early elections unless there is agreement on a caretaker government to continue until the expected end of the parliamentary term in 2023. This option appears to be preferred by Draghi.

“It is essential for the [parliamentary term] to continue in order to fight the pandemic, boost growth and implement the EU recovery fund,” said Draghi.

The EU funds depend on Italy hitting reform commitments, which the prime minister said were being met this year.

Italy’s president is chosen through a secret parliamentary ballot for which parties usually negotiate nominations, while candidates do not declare themselves.

Sun Dec 26 , 2021
High school business and finance teacher Megan DeLena has worked with the Wharton Global Youth Program for more than 10 years, teaching in our summer high school program, serving on our Educator Advisory Board, and using our classroom resources with her own students, both in Pennsylvania and later in South […]