Mac Fenner’s job at an AT&T call center was perfect on paper.

It paid nearly $19 an hour, had great benefits and friendly coworkers. It got Fenner, 27, back on their feet after they had to quit a furniture sales job in Utah at the beginning of the pandemic because commissions dried up overnight. It had everything anyone could ever want in a job.

The only problem was the harassment. Day in and day out for a year, Fenner answered calls from enraged customers who were behind on their payments, struggling with tech issues or other problems. The customers on the other end of the line hurled all sorts of creative combinations of profanity and guilty comments about how Fenner was forcing them to starve themselves in order to keep their phone bill current.

One female caller also rang AT&T consistently to make sexually explicit comments. Another customer told Fenner their “heart beat wrong” after they refused to waive a $400 charge on an account.

It got to the point where Fenner was throwing up from stress before every shift and could barely get out of bed. They eventually quit without any notice at the end of August and the sun immediately came out.

“Oh my god, I feel so much better,” Fenner said, beaming. “…Even on antidepressants and going to therapy I was like ‘I’m doing everything right, what is wrong?’. It was the job.”

Fenner was one of 32,000 Idahoans who quit their jobs in August, the second-highest increase in the nation from the previous month. This is up from 19,000 who quit in August 2020. This comes as workers nationwide are putting in their notices, sparking what some are calling “The Great Resignation.”

BoiseDev talked to a dozen Idahoans who quit their jobs in recent months to find out what’s driving these decisions. Like Fenner, some cited increased harassment at low-paying service industry jobs or difficulty with the transition from work as we knew it to the post-COVID world of virtual meetings. Others decided to pursue lifelong passions after being confronted with their own mortality after watching over 700,000 Americans die from COVID-19.

But, just because people are quitting their jobs left and right doesn’t mean they’re heading home to sit on the couch.

Craig Shaul, an economist with the Idaho Department of Labor, said although the number of Idahoans leaving their jobs is high, it still doesn’t exceed the 43,000 people who got hired in August. This shows most of the departures aren’t leaving the workforce, just looking for better opportunities.

And there are not many places better to do that than in Idaho where unemployment is 2.9%. The state had 59,000 job openings in August, leaving a gap of roughly 16,000 positions that went unfilled. This makes competition for workers stiff, pushing employers to hike wages, increase benefits and make other changes to try and entice workers.

Shaul said in many ways Idaho is “a victim of its own success” as the economy booms ahead of some other states due to the short-lived COVID-19 shutdowns in the state compared with different places in the country. He said this pushed Idaho’s recovery ahead of the curve, pushing the state’s already tight workforce to the limit of how many positions can be filled.

“Utah and Idaho are the only two states in the nation to be above pre-pandemic levels in terms of creating jobs,” Shaul said. “Before the pandemic, we had a tight labor force already and the dynamics we’ve been talking about with some people leaving their jobs and other people moving here, we’re experiencing a tight labor force.”

‘We know there are better opportunities’

Finding a new job was no sweat for Fenner.

Within 36 hours of walking away from AT&T, they had another job working full-time as the front desk clerk at a salon. While they worked at that job, they were able to land a better paying gig a month later with benefits at Gem State Paper & Supply Company working with salespeople outside the company.

They still have to answer phones and sometimes deal with frustrated customers, but dealing with people who will very likely have to meet Fenner in person ratcheted down the negativity considerably. Plus, now if someone is frustrated it is over something Fenner has control over, instead of something they have no power to fix.

Fenner’s resignation sparked a domino effect of their friends quitting jobs too in search of better pay, nicer customers or to get away from abusive bosses or mismanaged companies. All of them found new jobs within days, and although the stress of changing work environments isn’t to be underestimated, Fenner said they all found it to be worth it.

Work to do what you love, or love your work?

The pandemic was the big push Holland Van Noate needed to chase her dream.

Van Noate, 28, grew up helping her mother run her locally owned store. Because she was her own boss, Van Noate’s mother never missed a single sporting event, teacher’s night or other family functions because she had the flexibility to set her own schedule. That kind of life is something Van Noate has been dreaming about for years.

After graduating from Boise State University with a communications degree, Van Noate went to work for the short-term rental management company Vacasa. She rose through the ranks of the project management team, eventually landing in a senior position. It let her travel all over the country and she loved her coworkers.

But, then the pandemic hit and she couldn’t travel anymore or go into work in downtown Boise. Earlier this year, she finally pulled the trigger, left her job and opened her own boutique clothing store and gift shop on Latah Street in the hopes of bringing more local business to the Boise Bench.

“I started thinking ‘Okay, what’s my next step?’” she said, standing behind the register at derlüj. “Is it going to be finding something that is open? Do I go back to another startup? That just didn’t sound exciting, going back to another project management, 9-5 just working for someone else.”

Her shop, which gets its name from a backwards combination of her parents names, is filled with vintage clothing she curated in her travels around the country for Vacasa, candles, earrings, and other gifts. Since opening in early November, she’s been delighted by getting to meet more of her neighbors and adding to the vibrancy of the neighborhood.

“I think this mindset is different than our parents’ generation,” Van Noate said. “For them it was more work work work and then do what you love because you have money to do it, while my generation is a lot more like ‘If I am going to be working all week why don’t I find something I want to do?’”

This massive shakeup in the labor market is causing a lot of turmoil for employers, but it’s not necessarily a bad thing.

University of Idaho Clinical Associate Professor of Economics Steven Peterson said this type of unemployment where workers are seeking new jobs for better working conditions or changing their industry is considered good for the market. He said it’s a natural part of the market changing, and he expects it to level out eventually as the economy adjusts to all of the changes in the last year and a half.

“The technological change and the way we interact with the marketplace is constantly changing and I think that’s a good thing,” he said. “Quite frankly, I think that some of the wages in the service sector I thought for some time those wages were too low anyway, so this is a natural market process to improve those wages and that might be healthy in the long run.”

He said there are multiple factors at play, largely workers rethinking their relationship to their jobs, chasing higher wages and struggles with finding adequate childcare. But, there is also the smaller impact of over 3,000 Idahoans dying from COVID-19 and others who might have had to leave the workforce after being disabled by the disease.

“There is a fair number of people in their productive years that died from the pandemic and others were injured in a way that is in many cases still ongoing,” he said. “Both of those are in play and certainly at the margin they have to play a role in the market labor issues we have as well, but it’s not just that. That would be an additional factor, but that wouldn’t be the primary factor.”

‘A foundation had been shaken’

Peter Ritter also took a leap out of the corporate world.

Ritter, 29, earned both an undergraduate and master’s degree in accounting from the University of Idaho and headed right into a professional firm as a CPA doing taxes for clients in Nampa. He worked there for a few years, getting traditional experience in the business. But, once the pandemic hit he realized he was hoping for something more.

Now, he left the safety of a white-collar accounting job to work for Duck Club Presents, the parent company of Treefort Music Fest. There he combines his love of music dating back to his days at the University of Idaho radio station with his finance skills to help the company stay in compliance and manage its growth and other changes. So far, Ritter’s digging being able to work within a company he’s passionate about, not just give guidance to others.

“We accountants only believe we’re correct and if they followed our advice to a T they would be successful, but if you have a lot of clients who don’t listen or don’t know what they’re doing it gets frustrating because you feel like you’re seeing someone avoid their own success,” he said. “Just over time, I felt like I wanted to help build a foundation of something from the inside.”

He said watching fellow junior accountants leave the field for other industries and friends find happiness on the other side of the uncertainty that comes with leaving a job helped him with his decision to leave. Ritter said it was “now or never.”

“It felt like a foundation had been shaken,” he said. “I hadn’t felt this much uncertainty since 9/11…It became clear that during the pandemic it was like ‘I can’t just sit here and continue to be unhappy and feel unfulfilled. Now that the pandemic is here, who knows how long do we have?’”

Tue Nov 23 , 2021
Bitcoin (BTC) dropped below $56,000 on Nov. 19, completing a near 20% correction from the all-time high. The Crypto Fear & Greed Index, which remained in the greed zone for most of the past two months, has plummeted into the fear category with a reading of 34. Cryptocurrency research firm […] 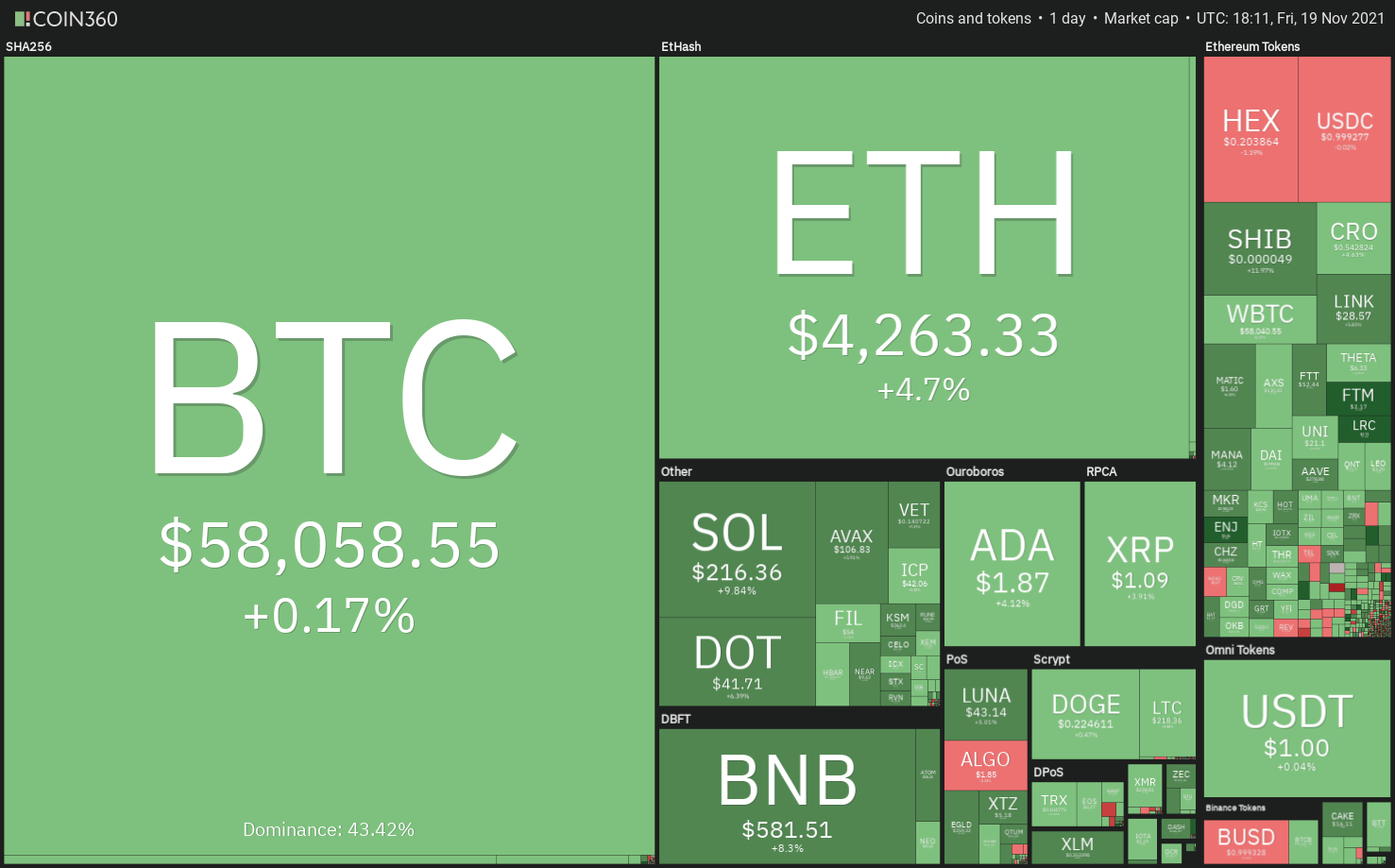