CHAPEL HILL, Tenn. – A fourth-generation dairy farmer warned that climate change-related regulations and a slew of economic woes could signal the end for her family’s way of life after nearly a century.

“We’ve been attacked in the dairy industry for a while now,” Stephanie Nash told Fox News. “Instead of educating people through the farmer, we’re educating them through people that have never farmed and we’re killing off our family farmers.”

Rising costs, labor and supply shortages and little support – in addition to climate change and conservation regulations – are all major obstacles threatening the Nash family, which has been in the dairy farming business for 92 years.

“They regulate us on every step we make,” Stephanie recalled from their time in California. “We’re constantly looked at, constantly manipulated and told what to do, and farmers, especially my dad’s age and older, they don’t want to be told how to farm.”

“Water rights, milk prices, feed prices, regulations on climate change … we had to fight with Los Angeles and San Francisco on every issue,” she added.

Her father agreed, saying the state took “an adversarial approach” when it came to dealing with farmers.

“They weren’t worried about farmers there,” Steven, 61, told Fox News.

California is the largest agricultural state in the U.S., growing roughly 40% of the country’s vegetables, fruit and nuts, according to the U.S. Department of Agriculture. It is also the biggest producer of dairy and wine. Prone to drought, the state has implemented a state law limiting farmers’ access to water.

While the move to Tennessee saved the family from bankruptcy, the Nashes are concerned with some rhetoric and proposed legislation coming from Washington, D.C., surrounding agriculture.

“They’re making all these bills and regulations, and people living in the city actually believe it instead of believing in your farmers that are actually putting food on the table for you,” said Stephanie, who is also a singer-songwriter and agricultural activist.

She hopes her advocacy, the Nash Creamery and their new cheese plant will be enough to keep the family business afloat.

“That’s what everybody prays for,” Stephanie told Fox News. “We pray for rain, we pray for fair prices and we pray for regulations that are not going to kill off our industry.”

Steven’s grandfather, Wallace Nash, began milking cows in central California in 1929. A decade later, Steven’s father, Howard, took over the farm and grew the operation from 30 to 200 cows.

The Nashes milk their cows twice a day, grow their own feed and recently opened a creamery and a cheese plant to help supplement costs.

In February, the USDA forecast the 2020 median farm household income at a loss of $1,840. On average, nearly 90% of a family farm’s income is supplied by another source of income or employment.

Small dairy farms are among the least sustainable type of farm today as they grapple with declining demand for cow’s milk and consolidation in their industry, resulting in much larger but fewer farms, according to the USDA. Since 2003, the U.S. has lost more than half of its licensed dairy operations, down to under 32,000 operations.

“The last farm bill, the dairy policy was put together without a lot of input from farmers,” Steven said of the 2018 Agricultural Improvement Act.

“They changed our pricing mechanism, and what that’s done is taken nearly a billion dollars out of the dairy industry, out of the farming sector, out of my segment, and moved it to processors and other people in the industry before it gets to the grocery store,” he continued.

At the urging of dairy processors, the 2018 farm bill changed an industry formula that determines the price of fluid milk under the Federal Milk Marketing Order system.

“The change contributed to substantial market volatility last year and has led to an estimated $750 million in losses for farmers compared to the previous Class I formula,” the National Milk Producers Federation said in an October statement. “Without a fix, dairy farmers will permanently bear unfair and unnecessary price risk compared to processors during times of unusual market volatility.”

Steven told Fox News: “It’s a lot of money to lose. That has been very difficult for a lot of people, myself included.”

As a result of this formula change, price increases in grocery stores doesn’t mean the farmer sees an increase on their end. Additionally, farmers face rising costs on gas and energy, labor shortages, high feed expenses and supply chain issues.

“We are a capital-intensive business,” Steven said. “We live and die on feed costs.”

He said those account for 55% of the farm’s expenses.

“We’re not like other businesses where we can just cut back,” he said. “Cows got to be fed every day, right?”

He added that the labor shortage and supply chain delays were also critical issues.

“We’re time sensitive,” he said. “We can miss our window of opportunity just because of a bearing or a tire.”

The National Milk Producers Federation estimated that shipping disruptions cost the U.S. dairy industry nearly $1 billion during the first half of the year from higher shipping and inventory costs, lost export volume and price deterioration.

Stephanie often posts on TikTok and YouTube to voice her concerns for struggling farmers and to educate people on how some legislative bills affect the agriculture industry.

“You look at big seed companies, you look at the ethanol plants, you look at all these big investors, again, going back to politicians, what are they investing in?” she said. “Why are they putting all this funding into certain areas? Because they’re going to make more money.”

“The farmer is going to be dead, and the family farms are going to be gone, and they’re going to continue to get richer off of stuff like plant-based and climate change,” Stephanie continued.

Stephanie often warns her followers about policy threats to the agriculture industry, like President Biden’s 30 by 30 plan, a federal push to conserve 30% of the nation’s lands and waters by 2030.

Similarly, the departments of the Interior, Agriculture and Commerce alongside the White House Council on Environmental Quality released Conserving and Restoring America the Beautiful, a preliminary report regarding conservation. It states that “federal agencies can and should advance conservation by supporting programs that incentivize voluntary conservation efforts and provide new sources of income for American farmers, ranchers, and forest stewards.”

Stephanie told Fox News: “There’s a lot of money in Washington, D.C., and I’m really scared that money is going towards persuading people in the USDA to go plant-based, to go climate change, to fund all of this other stuff … so corporate and big- investor farm systems continue to farm and gain access to our pricing in the grocery store.”

Steven, who hopes to pass on the farm to his daughter one day, said Nash Farms received aid from the federal government to help with coronavirus-related issues.

“While we use them, we don’t like them,” he said of the farmers aid programs. “I want a fair price that represents the work that we do.”

“We have a great product.,” Steven continued. “Why does the government got to support us because we can’t make it on our own? That’s that’s the fundamental issue here.”

Dairy farmers have received more than $3 billion, or about $1 of every $8, of the $24.4 billion disbursed to farmers and ranchers since COVID-19 payments began in May 2020, according to the USDA.

“We are in a place that we could go either way,” Steven said of his farm’s financial stability. “I’ve been there many times before, so we’ll just have to see what the next few months bring.”

Teny Sahakian is an Associate Producer/Writer for Fox News. You can reach her at [email protected]

The path to crypto adoption

Sun Nov 28 , 2021
Nonfungible tokens (NFTs) are evolving from a niche interest to a mainstream conversation. The variety of NFT art — from cuddly to edgy to menacing — is drawing in a new audience of enthusiasts. Beyond the art, NFTs are providing a glimpse into a new layer of social interaction. When […] 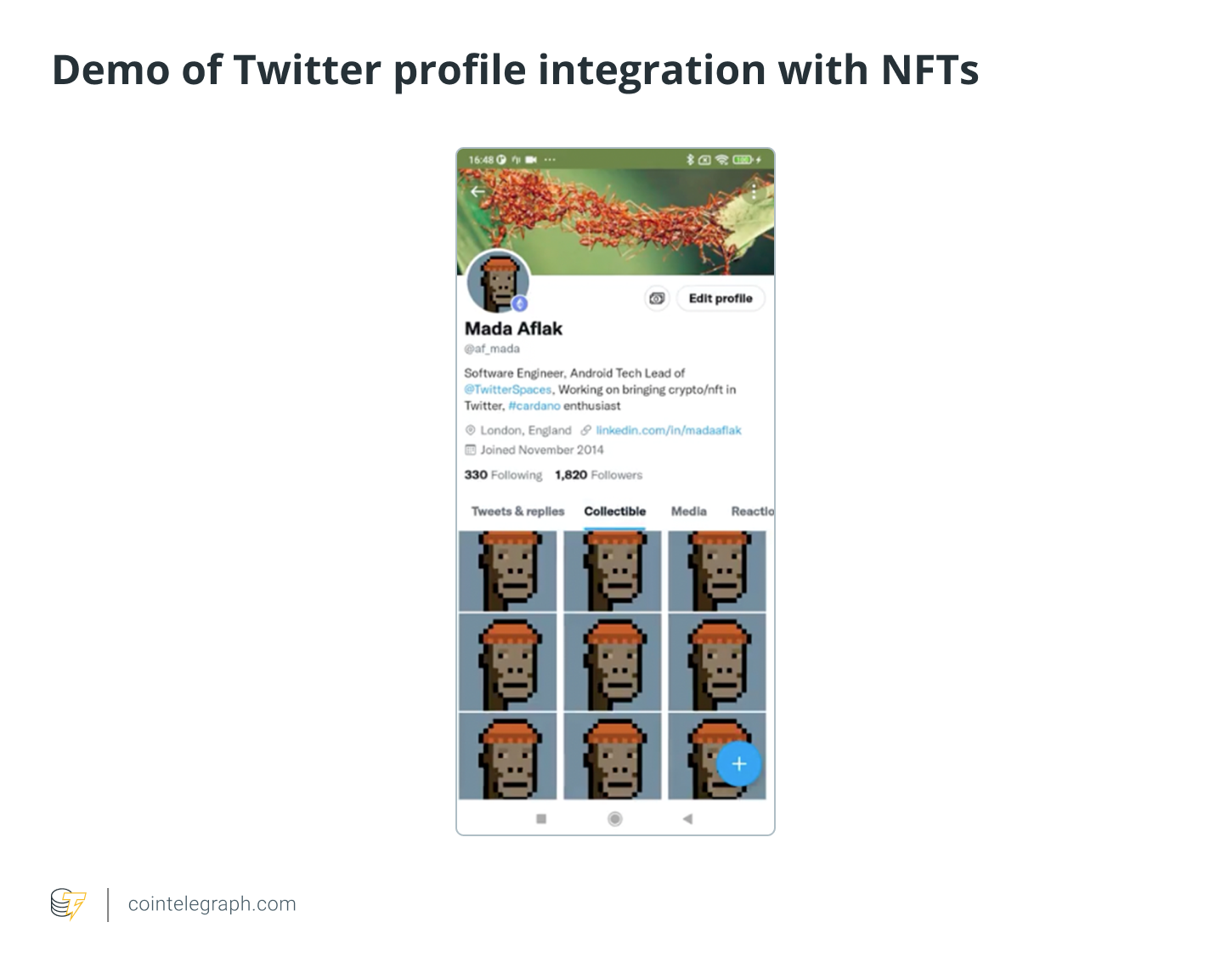