‘Every element of my economic plan is overwhelmingly popular,” President Biden said last week. “But the problem is, with everything happening, not everybody knows what’s in that plan.” This is an eye-opening observation, to put it mildly.

First, notice how much work the prase with everything happening does—a breezy parenthetical euphemism presumably for the roll call of mayhem this highly experienced and competent president is now delivering: humiliation in Afghanistan, chaos at the border, a sharp escalation in the pandemic, confusion and misdirection over vaccine mandates, a stalling economic recovery.

It is as though Mrs. Lincoln had said of that fateful 1865 Ford’s Theatre production of “Our American Cousin,” “It was a very good play, but the problem is, with everything happening, not everybody knows what was in it.”

Then there’s the curious but potentially revealing juxtaposition of the claim that Mr. Biden’s plan is overwhelmingly popular with the claim that there is widespread ignorance about it. I’ll leave you to guess what might have been the response from a scornful media if

had said something like this, but logically it does suggest the strong possibility that the reason the plan might be popular, as Mr. Biden claims, is precisely because people don’t know what’s in it.

No one would surely ever respond to widespread ignorance about the details of a massive policy innovation by simply plowing ahead and passing the legislation, would they? Oh wait. The Democrats have been here before. A decade ago, you may recall,

said it was necessary to pass a bill that rewrote the rules governing a fifth of the U.S. economy to find out what was in it.

Before repeating that master stroke Democrats might want to consider the possibility that one of the reasons people don’t know what’s in the economic plan is that Mr. Biden and his friends keep saying things about it that are false. As the plan faces its moment of truth this week, under pressure from all corners of his own party, the falsehoods have proliferated.

“Every time . . . I hear, ‘This is going to cost A, B, C or D,’ the truth is, based on the commitment I’ve made, it’s going to cost nothing. Because we’re going to raise the revenue,” Mr. Biden said Friday. This appears now to be the plea to those doubtful about the bill’s price tag—it costs zero because everything in it is paid for.

First, this is not true. As these pages have pointed out, the bill’s total likely real price tag is much higher than the advertised number and most of that isn’t paid for. But second, even if the expenditures were covered, this is a novel way of estimating the cost of something. That eye-wateringly expensive dinner you had last week didn’t really cost you anything because you paid for it.

You had choices. You could have used the money to invest in your children’s college fund. You could have paid off some of your credit card bill, the debt on which has quadrupled in the last year. But you chose instead to blow it on a few morsels of raw fish and a couple of bottles of 1982 Château Lafite Rothschild. Don’t worry, It didn’t cost you anything.

The Biden bill is paid for by the largest tax increase in history. You are entitled to argue that is a cost worth paying, but you can’t argue it costs nothing.

Which brings us to the other fiction the president and his friends have been aggressively promoting of late: the idea that the bill is good because the rich deserve to pay more. “I’m sick and tired of the super-wealthy and corporations not paying their fair share in taxes,” Mr. Biden wrote on

last week. But this favored Democratic talking point, whether articulated from a White House podium, or daubed in blood-red ink on a fancy dress, is bathed in mendacity. Corporate taxes end up being paid by much of the population. Individual income taxes have already become more progressive.

According to the Tax Foundation, in 2018, the top 1% of American taxpayers paid more than 40% of all federal income taxes. That is up from 33% two decades ago. The bottom 50% paid less than the top 3%.

This kind of rhetoric and policy is many things, but a recipe for social justice isn’t one of them. It is a stimulus program for tax accountants, a disincentive to investment and entrepreneurship, and a catalyst for further disintegration in a country already coming apart at the seams—where a larger and larger federal government is funded by a smaller and smaller proportion of the population.

With everything happening, you’d think a president who once promised to heal the nation’s wounds would know that.

Wed Sep 29 , 2021
Spinning on the hamster wheel allows Mr. Goxx to select a cryptocurrency to trade. Choosing one of two tunnels to run through allows him to buy or sell. YouTube/Screenshot by NPR What if we told you there was a hamster who has been trading cryptocurrencies since June — and recently […] 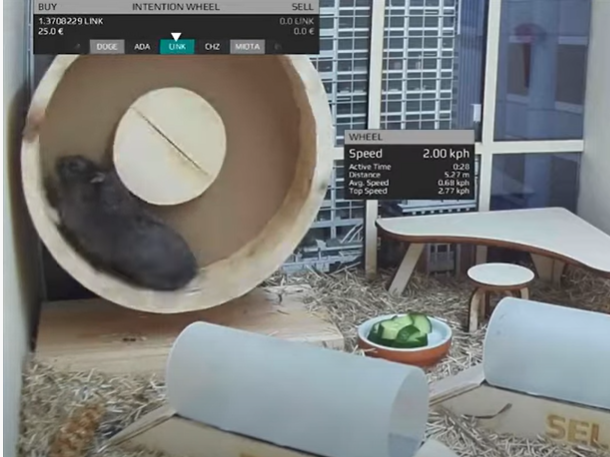