Some Democrats despise him. Some Republicans lionize him. He seems to be pleasing all the wrong people, but this could make Democratic Sen. Joe Manchin of West Virginia exactly the type of purplish crossover politician voters would cheer as a 2024 presidential candidate.

Manchin, of course, has gained fame and notoriety for saying he won’t vote for President Biden’s “build back better” legislation. There are only 49 other Democratic senators, so Manchin’s defection is a de facto veto. Liberal “progressive” Democrats such as Senators Bernie Sanders and Elizabeth Warren are aghast that Manchin would betray his party and his president. President Biden is likely hurt and disappointed. Republicans are gleeful at the Democrats’ disarray. Senate Republican leader Mitch McConnell would love to recruit Manchin to the GOP, breaking the Democrats’ hold on Congress.

But Manchin doesn’t answer to Biden or any other senators, Democratic or Republican. He answers to voters in his home state of West Virginia, which is deeply red. West Virginia went for Donald Trump in the 2020 election by 39 percentage points, a huge margin. Manchin won reelection in a combative 2018 race by 3.3 percentage points. Put those together and Manchin outperforms Biden in one of the nation’s reddest states by more than 40 points. There may be no other member of the House or Senate who so thoroughly transcends party boundaries.

Liberals think Manchin is out of touch with voters who desperately want an expanded child tax credit and other social benefits that would have been the costliest elements of the BBB legislation. It’s the other way around. Bernie Sanders and Elizabeth Warren think everybody should want those types of benefits, but some voters are skeptical. A recent NPR/Marist poll shows 41% of voters support BBB, 34% oppose it and 25% are unsure. Support is assuredly weaker in West Virginia. Such middling support is no basis to justify nearly $2 trillion in new spending, even if it’s over a decade.

[Click here to get Rick Newman’s stories by email.]

A better read of the typical voter

Manchin’s skepticism reflects voter attitudes much more closely than the certitude of liberal Democrats who are sure voters will love these benefits once they get a taste of them. Some 50 million families are already benefiting from the expanded child tax credit contained in the Democratic COVID relief plan Congress passed in March with no Republican votes. That bill made the tax credit advanceable for the first time, meaning recipients would get a portion of it in their bank accounts each month. But it runs out this month. That was supposed to generate a groundswell of support for prolonging it even further, or making it permanent. Yet there’s been no groundswell.

Manchin isn’t opposed to BBB as a whole. He objects to gimmicks such as extending the tax credit for just one more year, to keep the overall cost of the bill down. Like everybody else in Washington, he knows Democrats will try to pass another extension next year, and the year after that, etc. etc., if they have control of Congress. He’s calling out the subterfuge both parties use to make pet projects seem less costly than they are, one reason the national debt now totals nearly $30 trillion. Again, Manchin has a better read of the typical voter than many of his fellow Democrats.

Manchin says he’d support a more honest bill that doesn’t try to put one over on voters. The expanded child tax credit would cost about $190 billion if extended for one year, as it is in the BBB. But it would cost $1 trillion if expanded for 10 years. That’s what Manchin objects to. He says he would support universal preschool and many other provisions of the current BBB, and it’s possible Democrats will regroup in 2022 and produce a new and improved BBB that might have a chance of getting Manchin’s vote.

Manchin would have an edge in battleground states

Manchin’s approval rating in West Virginia is around 60%. It has risen, rather than fallen, amid Manchin’s opposition to BBB. It bears repeating: This is extraordinary standing for a Democratic lawmaker in one of the nation’s reddest states. Biden’s approval rating has dropped from 55% at the beginning of his presidency to around 43% and it may drift lower following the BBB fiasco. Who seems to really know what voters want?

Biden won the Democratic primary in 2020 by running as moderate opposed to the big-government agenda pushed by Sanders, Warren and other liberals. He beat Trump in the general election because voters were sick of Trump’s endless political combat and wanted somebody more peaceable. Biden promised to reach out to Republicans, and he did, in fact, with the bipartisan infrastructure bill Congress passed in November. But Biden has also been very solicitous of his party’s progressive wing, gladly including most of their wish list items in his BBB legislation, even as some of those liberal priorities fell out in the end. Biden’s tentative embrace of the Sanders wing has contributed to his slide in the polls.

Manchin, 74, hasn’t shown any interest in running for president, and he suggested the 2018 Senate campaign might be his last. But imagine Manchin as a Democratic presidential candidate: He’d be a more convincing moderate than Biden, and voters could be awfully sure he wouldn’t lurch leftward after getting elected. The left would surely mount their own liberal candidates in the Democratic primaries. But Sanders and Warren performed dismally in 2020 and it’s not clear who could do better.

Manchin could also defang Trumpism by attracting moderate Republican voters in a general election. Perhaps millions of them. He might not be able to beat Trump, or a Trumpy Republican, in Alabama or Mississippi or Wyoming. But there are several consequential states Trump won by less than 10 points, including Texas, Florida, Ohio and North Carolina. Republicans running those states use Bernie Sanders very effectively to tar all Democrats as the “radical left.” If a Democratic candidate were saying the same thing — with a Manchin-like track record — Republican scare tactics would quite possibly flop. Bernie Sanders will never put Democrats over the top in the toughest battleground states. Joe Manchin could.

Rick Newman is the author of four books, including “Rebounders: How Winners Pivot from Setback to Success.” Follow him on Twitter: @rickjnewman. You can also send confidential tips.

Mon Dec 27 , 2021
FRANKFURT—After years of digging in its heels, Germany is on track to reduce its giant foreign surpluses, a potential boon for trading partners like the U.S. For four straight years through 2019, Germany recorded the world’s largest current-account surplus, making it the biggest creditor to other countries and inviting criticism […] 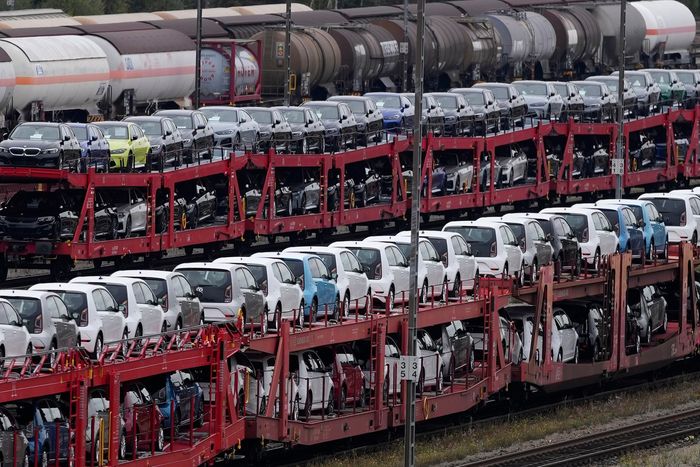