Editor’s Note: Morning Money is a free version of POLITICO Pro Financial Services morning newsletter, which is delivered to our subscribers each morning at 5:15 a.m. The POLITICO Pro platform combines the news you need with tools you can use to take action on the day’s biggest stories. Act on the news with POLITICO Pro.

The resignation of another top Fed official embroiled in a trading scandal at the central bank could help Chair Jerome Powell avoid some tough questions at his nomination hearing today.

But the revelations that some central bankers were actively trading for their personal gain while engineering a dramatic rescue of financial markets at the height of the pandemic could reverberate for years, and may undermine the Fed’s effort to rebuild public confidence as it seeks to rein in inflation.

Vice Chair Richard Clarida said he will step down Friday, two weeks before his term is scheduled to expire, our Victoria Guida reported. A person familiar with the matter said Clarida, whose term is up Jan. 31, was not planning to attend the January meeting of the Fed’s policy-setting committee.

“Resigning before the hearing helps Powell, a political reality the Fed and Clarida is surely aware of,” said Aaron Klein, a senior fellow at the Brookings Institution and former aide to Senate Banking Chair Chris Dodd (D-Conn.).

That doesn’t mean the scandal is going away.

Progressive groups have hammered the Fed over officials’ unusual trading during the early months of 2020, when the Fed intervened to help cushion the economy from the pandemic, and they continue to call for a fuller investigation.

“This is not a good look for an institution that has had issues related to inequities in income and wealth — the accusations coming out of the financial crisis, in the way that very cheap money has benefited equities and equity owners,” said Mark Spindel, chief investment office at MBB Capital Partners who has written extensively about the Fed’s relationship with Congress.

“The misguided inflation forecasts, the being behind the curve, the complexities of Covid, the [new] framework, rate hikes, balance sheet … [are] more than enough for senators to focus on,” he said. “He will be asked from both sides what went wrong.”

An ‘Alice-in-Wonderland’ fantasy — That’s how former New York Fed President Bill Dudley, in a Bloomberg opinion piece Monday, described Fed officials’ projections that inflation will melt away by 2024, even as the federal funds rate remains well below neutral.

“More likely, the Fed will have to leave the enchanted forest,” he said. “This means becoming a lot more hawkish, both in the near term and over the next few years.”

That followed an op-ed in the Financial Times on Monday from former Fed Governor Frederic Mishkin, who said the Fed “has been mugged by reality,” and is “behind the curve” in tightening.

Support from Sherrod — “Chair Powell, to his credit, recognized the importance of full employment – and what that means for all workers, particularly those at the margins of our economy,” Senate Banking Committee Chair Sherrod Brown (D-Ohio) will say in his opening statement. “He held firm against attempts to politicize the Fed, and prevented an economic downturn from becoming far worse.”

—“[S]ome are already suggesting the Fed pull back on its support of the broader economy, and make it harder for people to get jobs …The Fed must not allow Wall Street to recover, while working Americans are left behind.”

—”Chair Powell, President Biden renominated you to grow the economy for all Americans, not just those at the top. And to protect that growth from threats to our financial system, like risky Wall Street schemes, crypto bubbles, and increasing climate disasters. We expect you to meet these challenges, and I believe you have shown the leadership to do so.”

On a lighter note — Our favorite exchange from Powell’s last confirmation hearing, in January 2018, courtesy of the official transcript:

Mr. POWELL. I will also introduce two of my five siblings here today, my sister Libby and my sister Monica. The other three siblings are here in spirit and all will later claim to have watched this hearing live. [Laughter.]

Chairman CRAPO. Which I am sure will be true. [Laughter.]

Mr. POWELL. We will deem it true. Some stories are too good to fact check.

BITCOIN, ETHER DIP AS GENSLER HOLDS FIRM ON SEC’S CRYPTO AUTHORITY — Our Sam Sutton: “Bitcoin and Ether dropped to their lowest prices since September on Monday after SEC Chair Gary Gensler doubled down on his agency’s authority to designate digital currencies as securities, leaving the door open to future enforcement action.

“Gensler in an appearance on CNBC Monday morning declined to answer a question about whether Ether, which trades on the decentralized blockchain Ethereum, should be viewed as a security.”

—Also from Sam: The Government Accountability Office is urging the Treasury Department to beef up its oversight of cryptocurrency ATMs to help crack down on human trafficking and illegal drug sales.

CANNABIS BANKING CHAMPION PERLMUTTER WON’T SEEK REELECTION — Our Mona Zhang: “[Rep. Ed] Perlmutter (D-Colo.) tweeted Monday that he’s decided not to run for reelection this fall. Serving in Congress ‘has been the honor of a lifetime,’ he said in a statement, and cited ‘elevating the public safety risk of the cash-only cannabis industry here in our state and across the country’ as one of his proud accomplishments.”

TREASURY WARNS TAXPAYERS TO PREPARE FOR TURBULENT FILING SEASON — Our Aaron Lorenzo: “Americans can start filing their income tax returns Jan. 24, but existing backlogs and longstanding operational problems at the IRS, aggravated by the coronavirus pandemic, are likely to make for a frustrating filing season for taxpayers and tax preparers, a Treasury Department official said Monday.”

SEC PUSHES FOR MORE TRANSPARENCY FROM PRIVATE COMPANIES — WSJ’s Paul Kiernan: “The Securities and Exchange Commission is preparing to force more transparency from big private companies, as regulators grow concerned about the lack of oversight of the private fundraising that has fueled their rise.

“Private capital markets have become an increasingly popular way for companies to raise money in the U.S. in recent decades, allowing firms to acquire funding from institutions and wealthy individuals without the regulatory burdens of going public. The number of so-called unicorns — private companies valued at $1 billion or more — has continued to grow even amid the recent boom in initial public offerings.”

— NYT’s Jeanna Smialek: “Senator Elizabeth Warren, Democrat of Massachusetts, asked the Federal Reserve in a letter sent Monday to release more information about a series of financial trades that several top officials made in 2020, when the Fed was actively propping up markets.

—The Mercatus Center’s David Beckworth spoke with the New York Fed’s Lorie Logan, manager of the Fed’s asset portfolio, for the Macro Musings podcast about the March 2020 Treasury market crisis, the Fed’s new standing repo facility and the future of the Fed’s balance sheet.

TREASURY ROLLS OUT NEW QUARTERS FEATURING MAYA ANGELOU — “Each time we redesign our currency, we have the chance to say something about our country — what we value, and how we’ve progressed as a society,” Treasury Secretary Janet Yellen said in a statement on the first new coin released as part of the American Women Quarters program. “I’m very proud that these coins celebrate the contributions of some of America’s most remarkable women, including Maya Angelou.”

Erica Williams was sworn in as the new chair of the Public Company Accounting Oversight Board on Monday, the SEC said. Her term runs through October 2024.

Ligia Vado has joined the Credit Union National Association as senior economist. Vado worked previously as a professor of business analytics at Thomas More University and a disaster risk financing and insurance specialist at the World Bank.

BIG BANKS EXPECTED TO POST UPTICK IN CORE Q4 REVENUE — Reuters’ David Henry: “Analysts expect big U.S. banks to show an uptick in fourth quarter core revenues thanks to new lending and firming Treasury yields even while headline earnings will be mixed on differences in how each institution accounted for pandemic loan losses.

“On Friday, JPMorgan Chase & Co and Citigroup Inc are expected to post roughly 20 percent and 30 percent declines, respectively, in profits compared with the year-earlier quarter, while Bank of America Corp’s profits will be up 20 percent when it reports on Jan. 19, according to analyst estimates compiled by Refinitiv as of Friday. Wells Fargo & Co, which also reports on Friday, is expected to show a 67 percent jump in profits.”

ELI MANNING THROWS HIMSELF INTO PRIVATE EQUITY — Bloomberg’s Kim Bhasin: Former NFL quarterback Eli Manning is joining a private equity firm as a partner as he enters new endeavors after retiring from football. Brand Velocity Partners, which specializes in consumer products, is bringing Manning on to work on business development and deals. As part of the arrangement, he’ll advise on leadership and company culture with brands the firm backs.

“New York’s effort to help business owners dodge the cap marks the latest and most effective step by high-tax states to fight back against the $10,000 limit on deducting SALT, or state and local taxes, from federal income. Congress created the cap over Democratic objections in the 2017 tax law, and lawsuits and other workarounds have fallen short. Federal legislation to raise the cap is mired in intra-Democratic party fights in Washington.”

Sat Jan 15 , 2022
With the best job growth in over 40 years, inflation a national obsession and the Federal Reserve preparing to raise interest rates, it is easy to forget how different the world was before the pandemic. The global environment then was marked by sluggish growth, lackluster investment, worryingly low inflation and […] 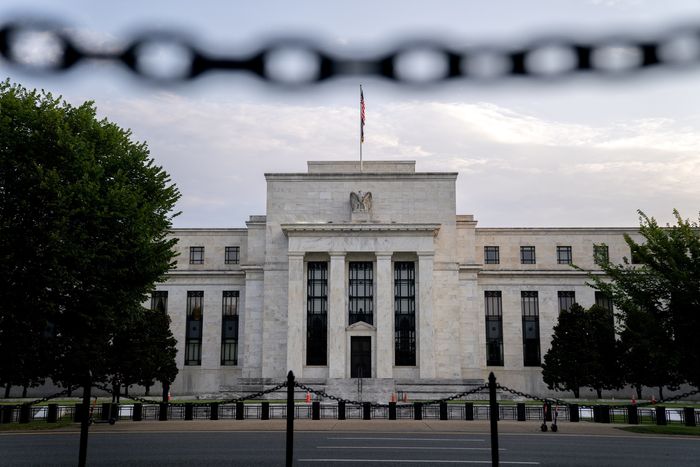