Russia launched air strikes deeper into Ukraine and called on foreign “volunteers” to join its war on Friday as Moscow stepped up unfounded allegations over chemical weapons threats.

With the invasion in its third week, Russian jets hit the central Ukrainian city of Dnipro while rockets pounded Lutsk in the west in a sign President Vladimir Putin is widening the scope of an assault that has targeted the country’s largest population centres.

A US official said on Friday it was unclear how much damage had been done in the strikes on cities in western Ukraine. But he said the Pentagon estimated that Ukraine still had 90 per cent of its combat power, including 80 per cent of the warplanes it possessed at the start of the invasion.

Chairing a session of his security council via video link, Putin ordered his army to deploy foreign “volunteers” to the conflict zone to “help” residents of Ukraine. Sergei Shoigu, Russia’s defence minister, told Putin that 16,000 from the Middle East were prepared to fight, many with experience of battling the terror group Isis.

Ukrainian president Volodymyr Zelensky condemned the call. “Thugs from Syria . . . from the country that was destroyed in the same way as the occupiers are destroying us now,” he said in a televised address.

The US official said on Friday the Pentagon had seen no evidence that Syrians or other nationals in the region were responding Russia’s campaign to enlist volunteers.

The Russian president later struck a different tone, speaking of “positive movements” in peace talks between Russia and Ukraine. Putin told Belarusian leader Alexander Lukashenko at a meeting in the Kremlin that Russia’s negotiators had informed him of “certain positive movements” in negotiations with Ukraine, without offering any further details.

The Russian and Ukrainian foreign ministers held talks in Turkey on Thursday, the highest-level meeting so far, but failed to reach a breakthrough or even establish a temporary ceasefire.

On Friday Russia expanded its aerial assault on Ukraine’s cities while shifting parts of an armoured column north of Kyiv into better positions to resume its stalled offensive on the capital.

A video posted on social media showed a huge explosion and fireball on the outskirts of Dnipro. Emergency services said the strikes were near a kindergarten and an apartment building and that one person died in the attack.

Pressing a narrative that has alarmed the west, Moscow requested that the UN Security Council meet on Friday to discuss allegations that the US had funded unconventional weapons research in Ukraine. The White House has said the allegations are “preposterous” and warned, along with the UK, that the false claims have been manufactured by Moscow to potentially justify its own use of chemical or biological weapons.

In a late-night address on Thursday, Zelensky said: “Allegedly, we are preparing a chemical attack. This makes me really worried, because we’ve been repeatedly convinced: if you want to know Russia’s plans, look at what Russia accuses others of [doing].”

A senior US defence official said there were no American biological weapons labs in Ukraine “or anywhere else in the world”.

Over the course of 16 days, Russia has so far failed to capture any large city and is far from achieving its goal of disarming Ukraine’s military and ousting its government.

But heavy shelling of Ukrainian cities such as Kharkiv and Mariupol has exacted a huge human toll and forced more than 2mn people to flee the country in search of safety. After a summit of its leaders in Versailles, the EU promised on Friday to offer temporary protection to “all war refugees from Ukraine”.

US vice-president Kamala Harris backed calls for a war crimes investigation into Putin’s invasion, citing civilian “atrocities” caused by indiscriminate bombing. “Absolutely there should be an investigation, and we should all be watching,” she said on a visit to Poland.

Russia’s traditional allies, oligarchs and friendly ex-politicians have made various attempts to edge the Russian president towards a settlement, including the former German chancellor Gerhard Schröder, who met Putin on Thursday, according to the German news agency DPA.

Russia’s economy is reeling from sanctions and Europe and the US have continued to tighten curbs on its ability to trade, including exploring whether to deprive the country of “most favoured nation” status at the World Trade Organization, which would increase tariffs on its exports.

On Thursday, Putin vowed to seize the Russian assets of international businesses that have suspended or closed their operations in the country — which range from McDonald’s to Ikea — using “legal solutions”. 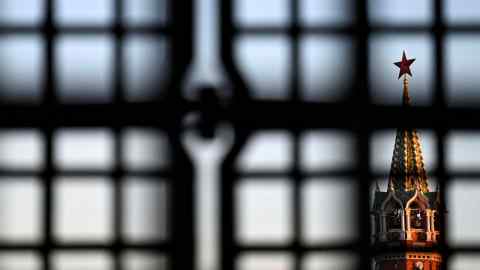 Ukrainian officials described the situation faced by civilians trapped in Mariupol, which has been subjected to a remorseless bombardment, as particularly dire.

Residents have no heat or phone service and have been confined for days in freezing shelters, with food and water supplies running out. Bodies have been buried in mass graves. Deputy prime minister Iryna Vereshchuk said more than 1,300 people had so far died in the 10-day siege of the city.

“They have a clear order to hold Mariupol hostage, to mock it, to constantly bomb and shell it,” Zelensky said in a video address. He accused the Russians of staging a tank attack in an area where there was supposed to be a humanitarian corridor out of Mariupol.

In an update, Ukraine’s military said it had been “repelling and holding back” Russian forces, whose troops made no significant advances overnight.

Britain’s defence ministry noted that persistent logistical issues were still hampering Russia’s military and that Moscow was likely “to reset and reposture its forces for renewed offensive activity in coming days”.

Western defence advisers said they believed the massive column north of Kyiv had split into two parts, making it harder to attack. One column, thought to be made up of the elite 1st Guards Tank Army, had now dispersed into the woods and countryside around the capital in preparation for an assault, they said.

The Russian defence ministry announced that its forces had taken control of Volnovakha, a besieged town in south-eastern Ukraine. It said Russian forces had launched rocket attacks that had disabled military airfields in Lutsk and Ivano-Frankivsk in western Ukraine and were advancing on Mariupol.

Sat Sep 24 , 2022
Rebell, who has previously worked in various reporter roles, specializes in personal finance topics. One of her top picks is “Smart Women Finish Rich,” which was written by her long-time colleague David Bach. Rebell recommends titles that are aimed at beginning investors up to seasoned savers.  Loading Something is loading. […]