Soaring energy prices driven by Russia’s invasion of Ukraine, and the potential for disruptions in Russian oil and natural gas deliveries are threatening to derail the global transition away from fossil fuels, just three months after world leaders vowed to take aggressive climate action in Glasgow.

While the calls to increase energy independence have grown louder in response, policymakers remain largely divided on how to get there.

“It may require not only an accelerated transition to renewables, which would be great, but at least in the meantime, an increased rate of hydrocarbon production in North America and the broader Middle East,” said Michael O’Hanlon, a senior fellow and director of research in Foreign Policy at the Brookings Institution. “In other words, we may have to temporarily suspend some of our more ambitious green targets, or at least put them in a certain perspective that they can’t be allowed to supersede the importance of dealing with Russia in this crisis right now.”

The Russia-Ukraine conflict threatens to push climate action to the back in countries that have publicly called for the most aggressive cuts to fossil fuels. Germany, for example, has vowed to phase out coal by the end of this decade, while shutting down all remaining nuclear plants by 2022.

Germany’s move to reduce its greenhouse gas emissions have come alongside a growing reliance on natural gas imports from Russia, with two-thirds being imported. That commitment was cemented along with Nord Stream 2, a 765-mile natural gas pipeline connecting Russia to Germany, completed last fall.

But a decision by German Chancellor Olaf Scholz to halt certification of the roughly $11 billion pipeline in response to the Kremlin’s invasion, signaled a big turning point for a country that has committed to eliminate all fossil fuels by 2045, ahead of the U.S.

“What’s happening right now creates a geopolitical urgency to diversify away from Russian fossil fuels even more quickly, than what would otherwise be mandated by these climate laws,” said Pavel Molchanov, energy group director at Raymond James & Associates. ”Half of Russia’s exports and more than half of its government budget comes from oil and gas. That’s going to dry up a lot sooner than it would have otherwise if we did not have this war that Russia is trying to unleash.”

In an op-ed published in the Wall Street Journal this week, Citadel CEO Ken Griffin called for the EU to seek out “long-term contracts” with U.S. shale producers to supplement Russian energy for liquefied natural gas.

“[The U.S] needs to produce more gas, not less,” Griffin wrote, along with Niall Ferguson, a senior fellow at the Hoover Institution at Stanford University. “Bans on fracking are misguided and neutralize a critical economic and geopolitical advantage.”

The two went on to argue that the U.S. should push European allies to sign additional supply agreements with major gas producers like Australia and Qatar.

O’Hanlon said any move to wean the West off of Russian oil and gas “would put Russia into a negative GDP growth territory.”

The White House has called for all fossil fuels to be phased out by 2050, with an aim to reach carbon neutrality by the middle of this century. But higher oil prices brought on by a supply crunch and the threat of a full scale invasion in Russia have put President Biden in the precarious position of advocating for a long-term reduction in fossil fuel usage while calling for short term relief through additional production.

“This will blunt gas prices. I want to limit the pain the American people are feeling at the gas pump. This is critical to me,” he said.

Thu Mar 3 , 2022
Here are your FOX Business headlines.  Cryptocurrency was surging early Tuesday morning with both Bitcoin and Ethereum reporting percentage hikes in double digits and Dogecoin up more than 7.25%. RUBLE LICKS WOUNDS, YEN AND FRANC HOLD FIRM WITH FOCUS SQUARELY ON UKRAINE At 4:30 a.m., Bitcoin was trading at around […] 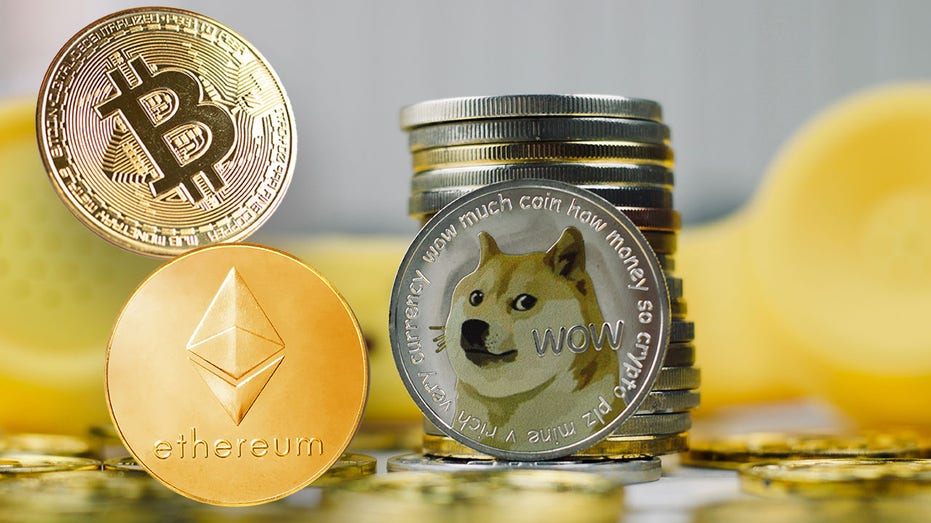