Clorox (CLX) became one of the latest major names to top estimates in results posted Monday after the closing bell, with the cleaning supplies and home goods company topping third-quarter sales and profits estimates and reaffirming its full-year guidance even as the company said it expects “cost pressures to persist.” Shares of Avis (CAR) and Simon Property Group (SPG) also jumped, with both of these companies posting quarterly earnings that exceeded expectations after market close.

Heading into this week, the expected earnings growth rate for the S&P 500 was at 36.6% for the third quarter, which while a step down from the second quarter’s rate, would still mark the third-highest pace in data spanning back to 2010, according to FactSet.

“I don’t think what’s going on is terribly surprising,” when it comes to the sizable year-over-year earnings growth many companies have reported for the third quarter, Pacer ETF’s President Sean O’Hara told Yahoo Finance Live. “I think what we need to see going forward is, is it sustainable, or are some of these outside factors going to be a bigger challenge than we expect?”

“Is inflation and the input costs that the producers are dealing with, is that going to derail things? Is the lack of workers?” he added. “There’re a lot of things out there that could potentially derail the market, especially as you’re making this transition from where we are, which is easy comparables versus last year, to more difficult ones going forward.”

In addition to the solid backdrop of corporate earnings, an ongoing economic recovery and still-accommodative positioning by monetary policymakers have also helped underpin equities in their march to new highs. For investors, the Federal Reserve’s latest monetary policy decision on Wednesday will help suggest how long the central bank will maintain its current levels of support. Many pundits expect to see the bank begin to pull back the asset purchases that comprised its quantitative easing program that had helped support the recovery, with fresh economic data reflecting a U.S. economy closing in on pre-pandemic conditions.

“We think that better days are ahead. Earnings are still growing at a pretty healthy clip. There’s a lot of people focusing on peak growth rates. That’s probably not the way to look at it,” Sameer Samana, Wells Fargo senior global market strategist, told Yahoo Finance Live. “From our standpoint, those low interest rates, still stimulative policy and really strong growth are what set the stage for strong equities in the next year.”

The U.S. vacancy rate for rental housing fell in the third quarter to close in on pre-pandemic levels.

Rental vacancies reached 5.8% in the three months ending in September, marking the lowest level since the second-quarter of 2020. This fell by 6.2% compared to the second quarter and from 6.4% in the same period last year.

Rent prices have also been increasingly notably over the course of the past year, with the median asking rent for vacant units rising to $1,203 in the third quarter from $1,160 a year earlier. And in the Bureau of Labor Statistics’ consumer price index, rent of primary residence prices last increased by 0.5% in September compared to August, accelerating from a rise of 0.3% during the prior month.

At session highs on Tuesday, the stock more than tripled to reach a record $545.11 per share. This outsized move to the upside triggered at least one volatility halt in the stock. Third-quarter net revenue nearly doubled over last year to reach $3 billion, and adjusted earnings per share of $10.74 were much better than the $7.24 expected. The company also said it would add more electric vehicles to its fleet over time during its quarterly earnings call with analysts.

Shares of education company Chegg (CHGG) sank 45% Tuesday morning after the company lowered its full-year guidance and highlighted a slowdown in the broader higher education industry.

For the third quarter. Chegg reported revenue of $171.94 million, which missed expectations for $174 million, according to Bloomberg consensus data. The firm also lowered its forecast for both revenue and adjusted EBITDA for the full year, and now sees revenue coming in at as much as $764 million, versus the as much as $815 million seen previously.

“In late September it became clear to us that the education industry is experiencing a slowdown that we believe is temporary and is a direct result of the Covid-19 pandemic,” CEO Dan Rosensweig said in prepared remarks for the company’s earnings call.

“A combination of variants, increased employment opportunities and compensation, along with fatigue, have all led to significantly fewer enrollments than expected this semester,” he added. And those students who have enrolled are taking fewer and less rigorous classes and are receiving less graded assignments”

9:42 a.m. ET: Tesla gives back some gains as Musk plays down Hertz deal

The carmaker’s high-flying stock is under pressure in early trading, after Elon Musk tweeted that Tesla has not yet signed on the dotted line with Hertz, which announced a deal last week to add Model 3s to its fleet of rentals. Musk also stated that regardless, the deal would have “zero impact” on Tesla’s bottom line.

But Hertz said it’s already receiving cars under its plan to add 100,000 Tesla EVs through 2022, but didn’t respond directly to Musk’s remark:

As we announced last week, Hertz has made an initial order of 100,000 Tesla electric vehicles by the end of 2022 and is investing in new EV charging infrastructure across the company’s global operations. Deliveries of the Teslas already have started, and consumer reaction to our commitment to lead in electrification has been beyond our expectations.

Here’s where markets were trading as the overnight session kicked off:

Airbus stands by plans for steep rise in output

Fri Nov 5 , 2021
Airbus has stood by its commitment to boost production, saying that demand from airlines coming out of the pandemic has been strong as air travel continues to recover. The European plane maker’s bullish stance came as it raised its full-year profit guidance and cash flow target for the second time […] 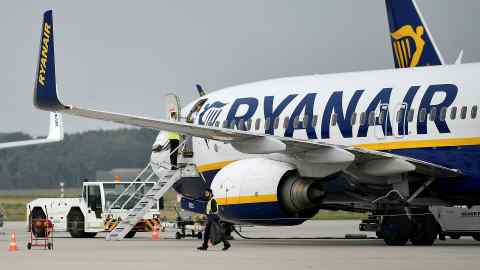