During his State of Union address Tuesday night, President Joe Biden touted his plans for the economy, as well as his plans to combat fraud and identity theft rife in pandemic relief programs like the Paycheck Protection Program (PPP).

The COVID pandemic relief programs disbursed more than $800 billion over two years by the government to help small businesses stay afloat. The loans, which helped owners use that money to pay for payroll and other eligible expenses, also led to widespread instances of the money being misused or misallocated.

As the U.S. Department of Justice (DOJ) goes after scammers who have falsified paperwork to obtain forgivable loans meant to give small businesses a leg up, the Biden administration’s top small business official insisted her agency would lend a hand in rooting out fraud and malfeasance.

“We continue to uncover the perpetrators. And so [we] will continue to pursue them,” SBA Administrator Isabella Guzman, told Yahoo Finance Live in an interview this week.

That’s something that’s ongoing and I don’t think it’s too late to continue to investigate and explore those cases of fraud,” she added.

Biden’s new special prosecutor will have “heightened resources” to “enact enhanced penalties” to those that fraudulently stole PPP money and unemployment insurance benefits.

So far, the Justice Department has charged 474 defendants with pandemic related fraud, alleging that more than $569 million was illegally obtained.

Data from Accountable.US, a watchdog group, found that nearly 130,000 recipients of the PPP were self-employed individuals with no employees, and making over six-figures annually – but received $20,833 in PPP funding, which was the maximum by the legislation.

Separately, a new paper published by the National Bureau of Economic Research reveals that only a fraction of the program’s cash pile was used accordingly. Of the $510 billion of PPP loans distributed in 2020, $115 billion to $175 billion went toward supporting jobs that would have otherwise have been lost, while about $335 billion to $395 billion ended up with business owners and corporate stakeholders, the paper found.

The program’s shortcomings has led the DOJ to arrest the CEO of PPP Loan lender MBE Capital for fraudulently issuing loans as a non-bank lender, securing $70 million in lender fees.

It’s unclear what the total dollar amount of the pandemic-related fraud allegations or recoveries are to date.

‘Future is strong’ for small biz

On Tuesday, Biden also gave a nod to struggling small business owners — who were among the audience hoping for a sign of relief amid soaring inflation and a tight labor market.

The past two years have been a whirlwind for businesses, and the volatility of the past week stemming from the Russia-Ukraine crisis has amplified risks to the recovery. Although the economy created way more jobs than expected last month, the data showed how tough its become for businesses of all sizes to retain and recruit workers.

“The president’s plan and his hope for the future is strong and resonates with small business[es] from the perspective of how they want to seek those opportunities into the future, and see more competition and opportunities for them to plug into the global economy,” Guzman told Yahoo Finance.

The president addressed his economic plan to counter soaring costs at the gas pump and grocery store amid the highest inflation in decades. Biden insisted that his American Rescue Plan is working, citing job creation and a still-expanding economy that survived the Omicron variant of COVID-19.

Despite the headwinds, Guzman’s agency saw 5.4 million business applications last year, according to the SBA.

“More Americans are taking that leap into the American dream of business ownership and the SBA is here as part of the president’s plan to make sure that businesses have the capital and the resources and the connections to be able to leverage those opportunities,” Guzman said.

Tue Mar 8 , 2022
Every morning at 5am, Ajit Yadav sets off to collect milk from the small farms dotted around the village of Karkhiyaon in the Indian state of Uttar Pradesh. The steel vats clatter against his weathered Honda motorcycle as he rides to a waiting truck that transports the milk to Varanasi, […] 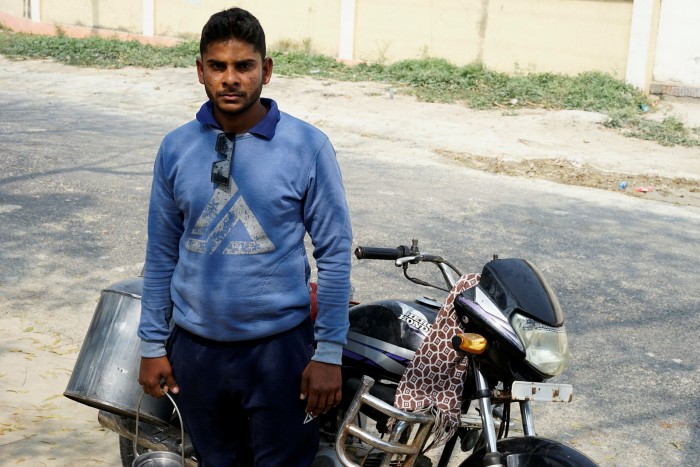