The Shiba Inu (SHIB-USD) digital coin has risen from obscurity (or meme status, depending on who you ask) to become the hottest trade in cryptocurrency.

Already, wild stories have emerged about small investors making a fortune on the digital coin bearing the likeness of a canine. For the uninitiated, Shiba Inu should not be confused with Dogecoin (DOGE-USD) — another dog-faced digital currency. Coincidentally, Doge also started life as a joke of sorts, en route to becoming one of the crypto world’s hottest trades.

With the emergence of a new coin based on the wildly successful Netflix’s “Squid Game” series, Shiba Inu’s explosive price action has sparked a debate about which of these emerging coins are legitimate investments, and which are scams. The answer is likely to reverberate across the red-hot cryptocurrency market, increasingly popular with big and small players alike.

According to Bank of America data that tracks social media crypto trends, Reddit/Twitter token mentions put Shiba Inu and Dogecoin among the top 5 for October with the largest month over month change in mentions.

Yet not everyone is on board.

“I’d prefer to stay away from any of that stuff,” Geoff Golberg, a crypto investor and CEO of social analytics firm, Social Forensics, told Yahoo Finance in an interview.

Golberg, who got into cryptocurrencies in 2015, isn’t nearly as excited by Shiba Inu or Dogecoin as other retail buyers. “I’m interested in cryptocurrency for the long term,” he said.

On the one hand, Golberg suggested these “meme coins” serve as a way to get more people interested in cryptocurrency, because they’re fun and enticing.

Still, the other side of a skyrocketing trade like Shiba could easily spell disaster. “A lot of people are going to get burnt and maybe that will leave them with a sour taste for crypto,” Golberg added.

Currently Shiba Inu is worth a fraction of a cent, 5 decimal places from a single dollar, ($0.00007336 to be exact). This makes the token something like a penny stock except as a cryptocurrency — and SHIB carries even less regulatory guardrails.

The coin is so cheap because the supply is so large. Unlike Bitcoin (BTC-USD) and Ethereum (ETH-USD) which both rely on scarcity at different levels as a value driver, by comparison SHIB’s coin supply is so large it almost seems boundless – roughly 400 trillion. For reference, Bitcoin’s total supply is capped at 21 million.

Back in July, 39-year old Joel Jelinski dipped his toes into the booming Shiba Inu trade.

“I didn’t buy much,” said Jelinski referring to the 10 million Shiba coins he purchased on the crypto exchange, Bitmart. Nonetheless, the investment played out profitably over the last three months, though he admits there’s not much of a long term commitment on his side.

“I’ve tripled my investment now and it could go up or it could go down,” said Jelinski, who admitted that he didn’t know anything about the SHIB team and or its growing ecosystem of products.

He doesn’t classify himself as a “typical Wall Street guy,” preferring instead to watch Youtube videos to try and track the next “hot” cryptocurrency that might rocket up in value for some reason. According to Jelinski, he seeks out the “high risk, high reward” opportunities where he can toss in a couple hundred dollars and see what sticks.

‘The power of community’

Matt Kohrs, a stock and crypto YouTuber with a significant following, is a massive holder of Shiba Inu coin. He pointed to an unidentified crypto wallet on the Ethereum (ETH-USD) blockchain, whose holdings in SHIB rose from $8,000 to a staggering $4.7 billion in a little more than a year’s time.

He admitted part of what he thinks drove in him and others is “the potential for such an impressive financial windfall.”

“It was pending for hours and hours and hours before it finally got filled” on Coinbase, said Kohrs. Coinbase, Robin Hood (HOOD) and even the New York Stock Exchange will sometimes halt trading orders during times of increasing volatility. As to why he struggled to get his orders filled, he said those exchanges were probably “just not expecting that type of volume.”

Currently, Kohrs’ $10,000 bet is “a little bit underwater,” meaning he hasn’t broken even. But he’s hoping his “bought the dip” gambit may yield dividends…eventually.

“One of the main things I’ve learned this calendar year is the power of community. There’s a good reason why AMC (AMC) is trading at a higher value compared to what typical fundamental analysis would value it, same with GameStop (GME). I think there’s a lot of value added from absurdly large community support,” said Kohrs.

Kohrs also shared a technical argument for why SHIB might prove profitable for him at some point, there’s talk in the SHIB community of “burning coins.”

Like share buy backs in the stock market, eliminating excess supply of a cryptocurrency, even one with an astronomically large supply, can improve the digital assets value over time. After all, as Kohrs pointed out while SHIBs supply is currently in the hundreds of trillions, it started at one quadrillion.

As with seeking highly shorted stocks for the chance to incite a short squeeze, Kohrs and others have pointed to a significant overlap in investor communities, between the so-called “SHIB army” and the retail trading Reddit crowd that call themselves “apes.”

“This is just another head turning thing, the same way GameStop turned people’s heads in January before it became a fight for market fairness and transparency” he explained. “You’re just watching something explode and thinking, ‘whoa, that’s possible’. It’s fun to watch.”

Read the latest cryptocurrency and bitcoin news from Yahoo Finance

Even after a weak patch, America’s economy is still in high gear

Mon Nov 1 , 2021
Oct 31st 2021 WASHINGTON, DC MANAGERS AT HUB GROUP, a transportation company, used to be able to click a few buttons at their headquarters in Illinois and, eight weeks later, receive a new shipping container from China, ready for use in America. But recently Phillip Yeager, the firm’s president, faced […] 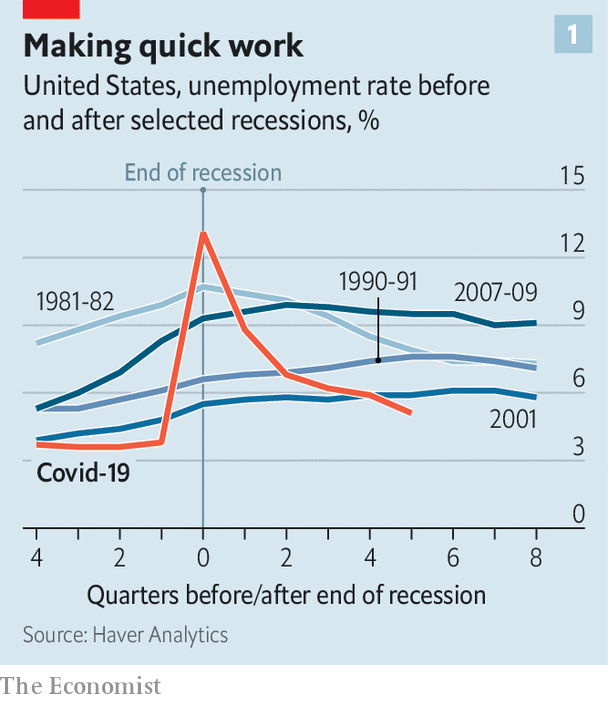