That’s the message companies and retailers are relaying, with bottlenecked West Coast shipping ports causing widespread delays and shortages of critical goods as the calendar shifts to Thanksgiving and Christmas, two of the busiest shopping dates on the calendar. And for small businesses still grappling with the fallout from COVID-19 restrictions, the situation is particularly grave.

On Wednesday, the Biden Administration on Wednesday took steps to try and alleviate a crisis that’s threatening the Christmas gift shopping rush. Others in attendance included the heads of Walmart (WMT), UPS (UPS), FedEX (FDX), the American Trucking Association, and the International Longshoremen.

The White House is calling for the ports in Los Angeles and Long Beach, California to operate 24/7. Administration officials promise a “90-day sprint” to alleviate backlogs ahead of the critical holiday shopping season.

However, observers are not optimistic that the problem will be completely resolved by President Joe Biden’s efforts.

“It will make a positive difference at the margins,” Phil Levy, Flexport’s chief economist, said in an interview.

“Four or 5% better, but it’s not all of a sudden that the backlog of ships that you see will be gone next week. The stuff will move faster. It will help. It’s a positive step, but the problem is very large,” he added.

In response to Biden’s initiative, however, Port of Long Beach Executive Director Mario Cordero told Yahoo Finance Live this week that even marginal steps to address the bottleneck were better than nothing.

“We’ve been talking about the need for a 24/7 mindset. I’m very appreciative that the president now given the crisis that we have has really given direction for the industry to really move in that direction,” Cordero said.

“It’s going to be challenging, but on the other hand there’s no other option. We cannot remain in the status quo,” he said.

While the ports are indeed working to speed up the flow of goods, Cordero explained that Long Beach implemented a 24/7 operations pilot program at one of their terminals “weeks ago.”

Yet it’s still unclear if that will expand to other terminals, as port officials continue to work out the operational details on how the transition to a 24/7 model will look like.

‘This stuff is driving us nuts’

Meanwhile, small businesses are hopeful that shipping bottlenecks may begin to ease up after the president’s initiative to lessen the congestion at the ports.

But some owners — — are now sweating about the winter holidays and deliveries. According to the , optimism has already been flagging given soaring inflation and widespread worker shortages.

“There’s a particular company that I buy holiday pillows from. They usually ship to me in July, beginning of August at the latest, but I still haven’t gotten that shipment,” Sonia Malloy, owner of Splurge Gifts in Greenwich, CT, said in an interview.

If they don’t ship in the next three weeks, we’ll probably say we can’t take the goods because then we won’t have enough of a window to sell.Sonia Malloy, Connecticut business owner

Malloy says she’s trying to plan around the shipping issues but it’s tough. Every year, they close the shop for a day to set-up the entire store with Christmas decorations and merchandise.

This year, she’s planning to do that on October 24th, but products from two of her key vendors might not make it in time.

“I’ve got my entire team staffed from nine to six on Sunday, the 24th. And if that product isn’t there, we’re gonna have to schedule for another set up day, and when we close the store, we lose revenue on that day,” Malloy said.

Due to the issues, Malloy is also concerned she could lose her “prime” holiday merchandise, which could affect her bottom line for the season.

“If they don’t ship in the next three weeks, we’ll probably say we can’t take the goods because then we won’t have enough of a window to sell,” she added.

And across the board and down the aisles, other small businesses are feeling the pinch as the holiday season draws closer.

“This stuff is driving us nuts,” a frustrated Robert Peden, owner of Atlas Manufacturing & Supply in Santa Clara, CA, told Yahoo Finance in an interview.

“We got delayed. We were supposed to get five sheets of something. They delivered one, they said the rest, maybe will be here in a month or two,”

Backlogs at Long Beach and Los Angeles have added weeks to Peden’s delivery time and more than doubled his shipping costs.

“We’re dealing with massive inflation. This is the late 1970s revisited,” Peden exclaimed.

“Fedex is going to increase their prices by 10% , UPS is increasing their prices by 8%, truckers have almost doubled because the cost of fuel and labor have gone up,” he said.

Meanwhile, economists warn that the supply chain problem is not just a backlog at the ports and customs; it’s also getting the things moving on the ground — and there have been plenty of problems there. Last month, by saying a lack of drivers was its single biggest business problem.

“There has been a shortage of truckers. There are limitations, they are regulated in terms of how much they can work. And these are real concerns,” Levy said.

“The core of this problem is that we had a system that was built for a certain capacity. And then we’ve had a huge surge in demand for moving goods through it, which exceeded that capacity,” he added.

Social Security Benefits to Increase 5.9% for 2022

Sun Oct 17 , 2021
Seniors and other Americans receiving Social Security benefits in 2022 will see the largest increase in their payments in four decades, reflecting surging inflation during the pandemic. Next year’s cost-of-living adjustment, or COLA, will be 5.9%, the Social Security Administration said Wednesday. The increase will translate to an addition of […] 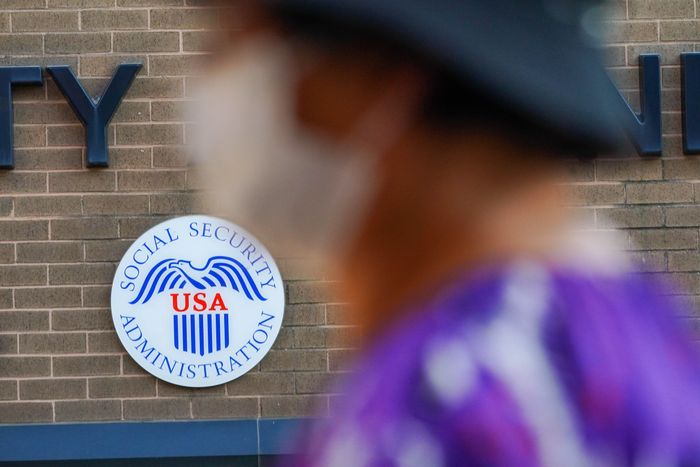