U.S. stocks bounced back Thursday morning from a turbulent previous session as investors weighed a series of upbeat earnings and a fresh read on weekly jobless claims out of Washington.

The Nasdaq rose 1% at open, recouping some losses from a volatile session on Wednesday that saw the benchmark close in correction territory — or at least 10% down from its peak — as rising bond yields and concerns around tighter monetary policy continued to plague investors. The Dow Jones Industrial Average and S&P 500 also advanced after earlier losses.

On the economic front, first-time weekly unemployment filings were up last week as disruptions from the latest Omicron-driven wave of COVID weighed on the labor market recovery. Initial jobless claims rose for the second straight week, coming in near the 300,000 level in a backslide from recent progress in the trajectory of unemployment filings. In December, the figure had reached a 52-year low of 188,000.

Corporate earnings will continue to pour in with Netflix (NFLX) scheduled to kick off tech results after the bell. Travelers (TRV), American Airlines (AAL), and Northern Trust (NTRS) reported results before the open.

The Federal Reserve is in a blackout period ahead of its policy-setting meeting next week but remained in focus as Treasury yields soared in anticipation of the central bank’s move on interest rates. The benchmark 10-year note topped 1.9% on Wednesday to mark the highest level since January 2020 before modestly retreating to 1.85%. Meanwhile, volatility in equities has persisted as investors’ expectations for growth is stymied by the prospect of tightening policy.

“At this stage in the business cycle, it’s less about the level of rates than about the shock in interest rates, and that shock will eventually wear off,” Clearnomics market strategist James Liu told Yahoo Finance Live. “You need a period where the market gets used to the fact that the Fed might have to accelerate interest rates.”

Liu added that worries have been compounded by the Federal Reserve’s game of catch-up, while investors and economists have called for the central bank to act on rising price levels.

Panic over a rise in interest rates is based on two assumptions, according to Commonwealth Financial Network chief investment officer Brad McMillan: The assumption that the increase reflects a problem with the financial markets and the belief that a change in rates suggests a move for the “correct” rates. According to McMillan, both assumptions are wrong.

“This narrative is pretty standard for this stage of the economic cycle,” McMillan said in a note, adding that headlines around potential interest rate hikes and subsequently slower growth and lower stock valuations are missing “context.”

Under the first assumption, any problem with the financial markets stems from the pandemic, and from an economic perspective, is appearing to fade, McMillan explained, adding that an increase signals a recovery from the problem, not an indicator of one. The second assumption, which says recent rates are the correct and normal ones as they are, is incorrect as well, since rates cannot currently be the “right” ones under the circumstances of the pandemic.

“If both of these assumptions are wrong — and they are — the narrative we are seeing in the headlines must be wrong as well,” he said.

In a speech on Wednesday, President Joe Biden said the burden of mitigating inflationary pressures falls mostly on the shoulders of the nation’s central bank. Fed policymakers have acknowledged in recent weeks that they stand ready to do just that.

“We’re not actually surprised by the volatility in markets this year,” Wilmington Trust senior economist Rhea Thomas told Yahoo Finance Live. “You do have a Fed that is expected to raise rates… we do expect the Fed to raise rates by 2-3 hikes this year.”

Home sales in the U.S. declined in December to ended 2021 on a low note, but annual sales activity for the entire year reached the highest level since 2006.

National Association of Realtors (NAR) reported that existing home sales fell 4.6% to a seasonally adjusted 6.18 million million units in December from a month earlier. November existing home sales were revised slightly down to 6.46 million from 6.48 million.

The number of sales was down 7.1% from the same month a year ago and came in far below analysts’ expectations of a 0.5% month-over-month decrease to 6.43 million units, according to Bloomberg consensus estimates.

“December saw sales retreat, but the pull back was more a sign of supply constraints than an indication of a weakened demand for housing,” said Lawrence Yun, NAR’s chief economist. Yun also attributed the slowdown in December to rising mortgage interest rates “which can produce mixed results.”

“Some people want to hurry and buy, others want to wait to buy,” he said. “Rising rates will cut into home sales.”

The partnership comes as other big automakers gear up to focus on autonomous vehicles, even amid a backdrop of regulatory and technological uncertainty.

“If you want to be able to get to truly autonomous capabilities in a consumer vehicle, and you have to industrialize hardware, software, all of these systems that come into play,” Luminar CEO Austin Russell told Reuters. “It is a completely different kind of business of going from a science and technology business to automotive corporation.”

Here were the main moves in markets at open

First-time weekly unemployment filings were up last week as disruptions from the latest Omicron-driven wave of COVID weighed on the labor market recovery.

Initial jobless claims rose for the second straight week, coming in near the 300,000 level in a backslide from recent progress in the trajectory of unemployment filings. In December, the figure had reached a 52-year low of 188,000.

“Given persistent labor shortages, the trend in layoffs should remain downward as businesses try to avoid laying off workers,” Rubeela Farooqi, chief U.S. economist at High Frequency Economics, wrote in a note ahead of Thursday’s report. “However, absenteeism from the Omicron variant could make the weekly data noisy over coming weeks.”

“Over the past year, we have experienced periods of high travel demand countered by periods of decreased demand due to new COVID-19 variants,” American Airlines CEO Doug Parker said in the earnings release. “This volatility has created the most challenging planning environment in the history of commercial aviation.”

Here’s how futures fared in pre-market trading before the opening bell:

Here were the main moves in futures contracts ahead of overnight trading: 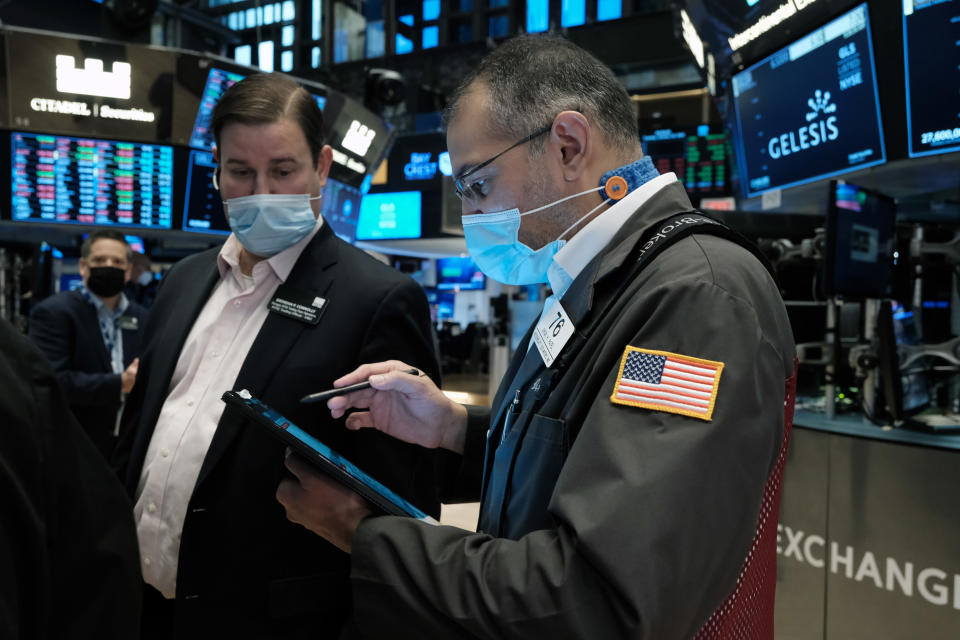