Stocks pushed into positive territory Wednesday afternoon after the Federal Reserve’s latest meeting minutes provided more clarity on the central bank’s thinking about addressing inflationary pressures. Investors also eyed a fresh print on the state of consumer spending in the Commerce Department’s latest retail sales report, which showed a larger-than-expected rebound in consumption at the start of the year.

The S&P 500 turned slightly positive and recovered losses after dropping as much as 0.9% earlier. In the Fed’s latest meeting minutes, central bank officials reiterated they were eyeing a near-term interest rate hike and would determine timing of their balance sheet reduction process “at upcoming meetings.” The minutes, however, made no mention of discussion of a potential 50 basis point rate hike at the Fed’s March meeting. Speculation that a rate hike of that magnitude might take place had been a source of uncertainty for investors.

Wednesday’s market moves came on the heels of a jump on Tuesday, with the S&P 500 closed higher by 1.6% in its first rise in four sessions. The jump came amid an announcement from Russia that it had pulled back troops near Ukraine and was seeking to continue diplomatic efforts with the West. However, President Joe Biden said during a news conference Tuesday afternoon that a Russian invasion of Ukraine remained “distinctly possible,” while noting that diplomacy should be given “every chance to succeed.”

Crude oil prices and energy stocks rose Wednesday to recover some of Tuesday’s losses, even as the latest geopolitical headlines appeared to reduce the threat of immediate military action and potential disruption of Russian energy supplies. West Texas intermediate crude oil futures rose above $93 per barrel, hovering near a seven-year high.

Tuesday’s move to the upside across the broader stock indexes represented a momentary relief rally after a three-day losing streak, but only modestly unwound year-to-date losses as concerns over inflation and the Federal Reserve’s next move lingered. And with inflation running at multi-decade highs, uncertainty around the trajectory of domestic economic growth has remained an ongoing point of concern for investors. Wholesale prices surged by 9.7% in January over last year, representing a near-record jump.

“At the moment, the market is twisting and turning on headlines, and we wouldn’t overplay it either way. There’s still a lot of uncertainty around this geopolitical risk,” Matthew Miskin, John Hancock Investment Management co-chief investment strategist, told Yahoo Finance Live. “We’re looking at the earnings picture — still pretty good. Economic data is OK. But right now we’re kind of stuck in this stagflation-type environment, where the economic data is kind of stagnating and yet inflationary pressures are still building.”

“We’re kind of in this air pocket here where we’re still in this stagflation-type backdrop,” he added. “We think growth [will] come back here in the next couple months, earnings stay solid, and equities offer a bit of an opportunity”

Another set of corporate earnings came in mixed. Roblox (RBLX) shares tumbled after the video-game company posted quarterly gross bookings that fell short of Wall Street’s estimates, signaling some slowing growth as stay-in-place behavior eased. ViacomCBS (VIAC) missed expectations for fourth-quarter profit and announced the company’s name was changing to Paramount in a nod to its streaming platform, Paramount+. Airbnb (ABNB), meanwhile, posted fourth-quarter sales and bookings that topped estimates, becoming one of the latest accommodations companies to highlight encouraging trends in the travel recovery.

In the minutes, the Fed reaffirmed it was prepared to undergo a faster balance sheet runoff process than it had previously given the current economic backdrop and elevated inflation.

It also reaffirmed members “anticipated that it would soon be appropriate to raise the target range” of benchmark interest rates.

The minutes also noted that the median respondent to the Open Market Desk’s surveys of primary dealers and market participants expected the balance sheet runoff process would begin in the third quarter of this year. That would be a year-and-a-half sooner than respondents suggested in December.

1:52 p.m. ET: Despite near-term volatility, ‘the market will be able to push through’: Strategist

U.S. stocks have endured steep losses so far in 2022, with volatility returning after a third straight year of double-digit gains for the S&P 500 in 2021. The S&P 500 has fallen nearly 7% for the year-to-date.

But despite the near-term concerns around geopolitics, inflation and monetary policy, the solid macroeconomic landscape and set-up for corporate profits will help underpin an eventual steadying and rebound in equities, according to at least one strategist.

“We’re seeing some volatility in the market, and we think the market will remain volatile near-term just given some of the things going on in the macro backdrop,” Nadia Lovell, UBS Global Wealth Management Americas senior equity strategist, told Yahoo Finance on Wednesday. “But the economic outlook I think still remains very good. When we look out for full-year 2022, we still expect economic growth to remain above-trend. We’re looking for just under 4% [GDP growth] this year. And corporate balance sheets and corporate earnings look good.”

“So while there might be some continued volatility in the market … we do think that ultimately the market will be able to push through and reach higher levels, particularly as the earnings growth outlook looks good,” she added.

The National Association of Homebuilders’ (NAHB) February index dipped to 82, matching consensus estimates, based on Bloomberg data. This came following a read of 83 in January. Despite the relatively low dip in the latest print, however, the index likely has further to fall as interest rates move higher this year.

“Residential construction costs are up 21% on a year over year basis, and these higher development costs have hit first-time buyers particularly hard,” NAHB Chief Economist Robert Dietz said. “Higher interest rates in 2022 will further reduce housing affordability even as demand remains solid due to a lack of resale inventory.”

Other economists echoed a similar sentiment.

“Current sales remain at the peak, but buyer traffic has dropped by five points since December and expected future sales are down five points,” Ian Shepherdson, chief economist for Pantheon Macroeconomics, wrote in an email. “That’s no surprise; people rush to lock-in to mortgage offers when rates are rising quickly, supporting sales for a while. But the next big move in mortgage applications, home sales, and homebuilder sentiment, will be to the downside.”

Output at U.S. manufacturing facilities increased in January after back-to-back monthly declines, in a solid print for the goods-producing sector despite ongoing supply chain challenges and shortages.

Manufacturing production rose 0.2% in January, according to Federal Reserve data Wednesday. This matched consensus estimates, based on Bloomberg data, and followed a 0.1% decrease in December. Manufacturing accounts for nearly 12% of total U.S. economic activity.

Industrial production, which captures mining and utilities output in addition to factory output, posted a much larger-than-expected 1.4% jump in January. This was well ahead of the 0.5% rise expected.

Here’s where stocks were trading just after the opening bell:

9:10 a.m. ET: Import prices jump by the most in more than a decade amid energy price surge

Prices for U.S. imports jumped at the fastest rate since mid-2011 in January, in yet another signal of persistent inflation pressures across the supply chain.

Import prices rose 2.0% in January month-on-month, according to new Labor Department data Wednesday. Consensus economists polled by Bloomberg were looking for a 1.2% increase for the month. Import prices had fallen by 0.4% in December.

Over last year, import prices were up a much larger-than-expected 10.8%. This came following a 10.2% annual rise in December.

U.S. retail sales jumped more than expected in January to recover from a December drop, with spending across a broad range of sellers rebounding at the start of the year.

The total value of retail sales rose 3.8% in January month-on-month, according to the Commerce Department. exceeding consensus estimates for a 2.0% rise, based on Bloomberg consensus data. In December, retail sales dropped by 2.5%, which was downwardly revised from the 1.9% drop previously reported. Many economists attributed the decline to a pull-forward in the holiday shopping season, with many consumers making purchases in October or November instead to get ahead of supply chain issues.

Here were the main moves in markets Wednesday morning:

Here were the main moves in markets Tuesday evening:

Mon Feb 21 , 2022
Vladimir Putin and Joe Biden have accepted “the principle” of a summit to ease tensions over Ukraine, the White House and French presidency said, capping a series of increasingly urgent diplomatic efforts led by Emmanuel Macron to defuse the crisis. The possibility of a meeting between the Russian and US […] 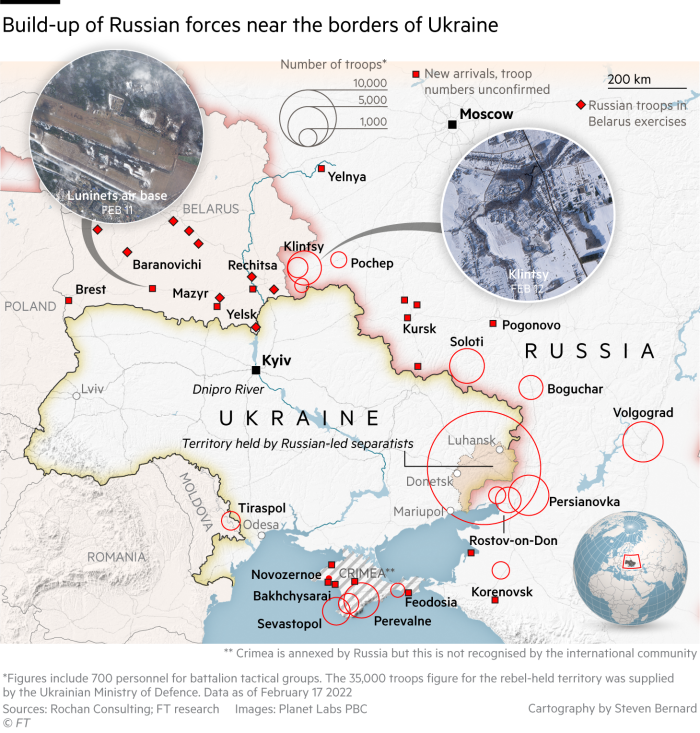