U.S. producer prices recorded another monthly gain in January amid continued supply chain disruptions, serving as yet another indicator of persisting inflationary pressures and reiterating calls on the Fed to raise interest rates.

“Factories are producing more inflation than goods at this point and with supply and labor shortages not going away, inflation is going to stay on the front burner of Federal Reserve officials’ concerns for now,” FWDBONDS chief economist Christopher S. Rupkey said in a note. “The Fed is going to start moving up interest rates to curb economic demand, but if inflation keeps going, consumers will stop buying all on their own because they can’t afford it.”

On the geopolitical front, fears that the Kremlin will green light a move to force in on Ukraine as soon as this week have created a new headwind for global markets worried the conflict could exacerbate inflation and spur other economic disruptions. The Wall Street Journal reported on Monday the U.S. was closing its embassy in Kyiv and destroying networking and computer equipment as a Russian military attack becomes increasingly imminent.

“The escalation of Russia and Ukraine tensions come at a time when the stock market is already vulnerable given inflation worries and the potential for Federal Reserve tightening,” Sanders Morris Harris Chairman George Ball said in a note. “If an armed conflict between Russia and Ukraine is somehow avoided, a short-lived relief rally is likely, but there are still too many worries on the horizon for any type of longer lasting upward move higher in stocks.”

The geopolitical tensions add to the uncertainty around central bank policy that has dominated market sentiment in recent months. Last week, the Labor Department reported the Consumer Price Index (CPI) notched a steeper-than-expected 7.5% increase over the year ended January to mark the largest annual jump since 1982.

The surge heightened calls for the Federal Reserve to intervene more aggressively than anticipated to rein in soaring price levels, even raising the possibility of an emergency hike before the bank’s next policy meeting in March.

“You have everything laid out perfectly for the market to go lower,” he said, pointing to higher interest rates, slow earnings, and slow economic growth around the globe. “There’s no good reason to see this market go higher.”

“We believe it is important for investors to focus on market signals, rather than headlines, while also respecting traditional patterns for prices, interest rates, and equity valuations,” Lynch said.

Although earnings season is slowly winding down, investors will tune in this week for another docket of corporate results to weigh against monetary and geopolitical conditions.

Shares of semiconductor companies advanced in morning trading, contributing to broad-based gains across the technology sector.

Other semiconductor peers also traded higher early Tuesday. Shares of Nvidia () gained 7.08% to $259.84 a piece. The company is scheduled to report fourth quarter results on Wednesday. Analysts at Piper Sandler expect “a significant beat and raise” on strong performance in its gaming and data center businesses.

Advanced Micro Devices () was up 2% to 116.58 per share after the company closed its acquisition of Xilinx on Monday in a record deal for the chipmaker industry valued at $50 billion.

“There’s tremendous investment that’s happening across the semiconductor industry, whether you’re talking about on the wafer side or on some of the substrates or the back-end assets, so we are making progress,” AMD CEO Dr. Lisa Su said in an interview with Yahoo Finance Live. “I do believe that the first half of this year will continue to be quite tight, but the second half of this year, I think things will get a little bit better.”

U.S. producer prices recorded another monthly jump in January amid continued supply chain disruptions, serving as yet another indicator of persisting inflationary pressures.

The U.S. Bureau of Labor Statistics reported its Producer Price Index (PPI) for final demand rose 1% during the month of January, seasonally adjusted. Economists had forecasted an advance of 0.5%, according to Bloomberg consensus estimates.

Final demand prices moved up 9.7% on an unadjusted basis for the 12 months ended January 2022. Economists polled by Bloomberg called for a 9.1% year-over-year advance.

PPI gauges the average fluctuation in selling prices by manufacturers to business and serves as a leading measure of consumer inflation.

The jump in producer prices last month follows advances of 0.4% in December 2021 and 0.9% in November.

Restaurant Brands International Inc. (QSR) reported fourth quarter results on Tuesday that beat estimates on revenue and profit, powered by a surge in online sales and a recovery in demand at its Burger King and Tim Hortons chains as consumers increasingly dine out.

The company’s global digital sales rose more than 65% to $10 billion in 2021 on the heels of efforts by Restaurant Brands and its fast-food chain peers to boost investment in e-commerce as more people ordered their food online during the pandemic.

With more Americans vaccinated and COVID restrictions easing, consumers have also increasingly returned to in-person dining after the virus kept people away from eating out.

Tim Hortons, which typically accounts for the greater half of Restaurant Brands’ revenue, saw an 11.3% increase in comparable sales in Canada, while same-store sales at Burger King in the United States rose nearly 2%.

Here were the main moves on Wall Street in pre-market trading Tuesday:

Here were the main moves in markets ahead of overnight trading Wednesday:

Tue Feb 15 , 2022
Scotland’s relatively cautious approach to coronavirus policy had an effect on public behaviour last year, including encouraging the greater use of masks, but did not stop death rates climbing above those of England during the Delta and Omicron variant waves, Financial Times analysis of official data shows. Scotland continued to […] 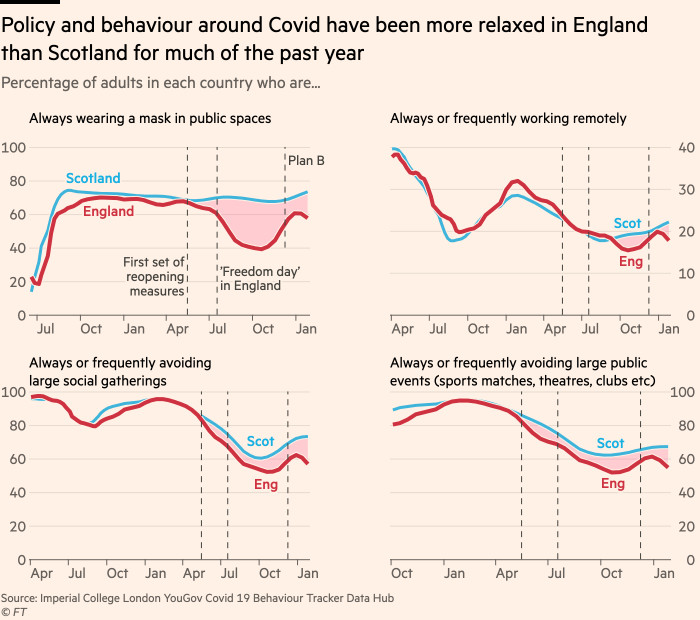