Stocks rallied Friday for a second day in a row as traders eyed the latest developments in Russia’s invasion of Ukraine and the world’s response.

The S&P 500 advanced more than 2%, rising further after a 1.5% jump on Thursday. The Dow and Nasdaq also built on Thursday’s gains to add more than 1% intraday on Friday. The Dow closed up by more than 800 points, or 2.5%, posting its best day of 2022. The Nasdaq ended higher by more than 200 points, or 1.6%. The move came after new economic data showed U.S. personal spending rose more than expected in January, even accounting for a surge in inflation. Personal consumption expenditures (PCE), a closely watched gauge of inflation, soared by 6.1%, or the fastest rate in 40 years.

Stocks moved higher even against the backdrop of Russia’s military attack of Ukraine and Western nation’s sanctions on Russia. Though equities have been sliding and energy commodity prices soaring in recent sessions as investors considered the financial market impacts of the conflict, markets at least temporarily stabilized in absence of further evidence of U.S. economic damage.

“The market is going to overreact to good news and bad. The news [Thursday] morning was sell, sell, sell,” Allan Boomer, Momentum Advisors chief investment officer, told Yahoo Finance Live on Thursday. “And now we analyzed the news … I think what the market has decided is that this Ukraine-Russia [situation] is a tragedy, [but] it’s not necessarily a global event that’s going to cause us to fall into a deep recession.”

“I think the biggest factor right now is the Fed,” he added. “And if anything, this Russian event may make the Fed a bit less hawkish.”

And indeed, market participants have now priced in a much lower probability that Federal Reserve officials will front-load their interest rate hiking cycle and raise rates by 50 basis points at the end of their March meeting. The last time the Fed raised rates by more than 25 basis points in one meeting was in 2000. While such a move would serve as an aggressive shift by the Fed to begin actively reining in inflation, it could also further roil financial markets that have already endured increased volatility this year and that have now also been spooked by the specter of further international conflict.

“This has been the second worst start to the year for U.S. equities since 2000. Yet, these moves are not solely (or even mostly) driven by the Russia/Ukraine tensions,” Seema Shah, Sharing Principal Global Investors chief strategist, wrote in an email. “Equity declines began in January and were, at least initially, driven by inflation concerns and expectations for significantly sharper central bank tightening.”

“Energy prices had been rising steadily throughout the pandemic recovery and in response to lower-than-expected OPEC+ production. Concerns around Federal Reserve balance sheet reduction caused credit spreads to start to gap out in early January,” she added. “The Russia/Ukraine situation is certainly significant—but it has simply compounded these already challenging market conditions.”

Other strategists also suggested that U.S. stocks would trade primarily based on the monetary policy and earnings implications of any impacts of the latest geopolitical tensions.

“The U.S. economy has pretty low exposure directly to Ukraine and the situation with Russia. However, the important thing here is, how does it impact inflation expectations? And that’s really what we’re keeping an eye on,” Anna S. Han, Wells Fargo Securities equity strategist, told Yahoo Finance Live on Thursday. “As inflation becomes a variable for corporates, the potential for it to eat away at earnings, or a potential for it to really steer the Fed to accelerate or decelerate that rate hike cycle — that’s what we’re looking at.”

Ford (F) said on Friday that it would pause production of its top-selling F-150 pick-up trucks at its Kansas City factory due to the ongoing chip shortage.

The automaker is one of many to suspend or pull back on production due to supply chain-related disruptions. In September, General Motors cut production at a number of North American assembly plants due to chip shortages. Earlier this month, Ford had said it expected sales to drop by the single to low-double-digits due to semiconductor shortages.

The three major stock indexes soared Friday midday, looking past geopolitical tensions and instead focusing on a bevy of solid economic data.

The S&P 500 jumped by 1.8%, with the financials, healthcare and materials sectors leading the way higher. The Dow added more than 600 points, or nearly 2% as Johnson & Johnson, Merck and Amgen outperformed. The Nasdaq added 1.2%.

The risk-on mood extended to Bitcoin, which jumped more than 9% to trade above $39,000. Treasury yields rose slightly, and the benchmark 10-year yield added 0.7 basis points to hover around 1.98%.

Pending home sales posted the largest decline in nearly one year at the start of 2022, with rising interest rates and tight inventory levels weighing on housing market activity.

Homes under contract to be sold declined by 5.7% in January compared to December and fell by 9.5% compared to the same month in 2021, the National Association of Realtors (NAR) said Friday. The monthly dip was the largest since February 2021, and represented a third straight monthly decline.

Consumer sentiment edged up in late February but still marked the lowest level in a decade, according to the University of Michigan’s closely watched monthly index.

The institution’s headline index from its Surveys of Consumers was upwardly revised to 62.8 in the final monthly print, up from the 61.7 previously reported. Still, even with the revision, this was the worst reading in about 10 years. In January, the index had stood at 67.2.

“The loss was still entirely due to a 12.9% decline among households with incomes of $100,000 or more,” Richard Curtin, Surveys of Consumers chief economist, said in a statement. “The February descent resulted from inflationary declines in personal finances, a near universal awareness of rising interest rates, falling confidence in the government’s economic policies, and the most negative long term prospects for the economy in the past decade.”

“The financial harm and growing angst among consumers about rising inflation have pushed nearly nine-in-ten consumers to anticipate interest rate hikes,” he added. “The Fed’s clinging to the transient hypothesis meant missed opportunities to nip inflation at its earliest stages; aggressive actions are now needed to avoid the potential establishment of an inflationary psychology that acts to form a self-fulfilling prophecy.”

U.S. consumer spending rose at a faster rate than expected in January even adjusting for price increases, suggesting the biggest part of U.S. economic activity was holding up despite persistent inflationary pressures.

Personal spending rose at a 2.1% rate in January, the Bureau of Economic Analysis (BEA) said Friday. This came in well above the 1.6% jump expected, according to Bloomberg consensus data, and helped reverse a 0.8% monthly drop in spending in December.

Real personal spending also exceeded estimates, rising by 1.5% during the month versus the 1.2% increase anticipated.

The latest consumer spending data tracked with the Commerce Department’s better-than-expected January retail sales report released earlier this month. That report showed a 3.8% rise during the month, or well above the 2% increase expected at the time.

BEA data Friday also showed a flat monthly reading on personal income, following a 0.4% rise in income in December. Still, this was better than the 0.3% drop anticipated.

A closely watched measure of inflation soared at the fastest rate in 40 years in January, adding to a bevy of recent data underscoring persistently elevated levels of inflation reverberating throughout the U.S. economy.

The Personal Consumptions Expenditures (PCE) index jumped 6.1% in January over last year, the Bureau of Economic Analysis said Friday. This represented the fastest rise since 1982, and topped expectations for a 6.0% year-on-year increase, according to Bloomberg consensus data. In December, PCE rose by 5.8% on an annual basis. On a month-over-month basis, the PCE rose 0.6%, matching expectations.

Core PCE, which strips out volatile food and energy prices, rose 5.2% over last year in January. This core measure of inflation — and the Federal Reserve’s preferred gauge of underlying price trends — also accelerated from the 4.9% annual rate seen in December. And at 5.2%, this marked the fastest increase since 1983.

Here’s where stocks were trading ahead of the opening bell:

Here were the main moves in markets Tuesday evening:

Corporate America's 2021 profits were higher than ever

Sat Feb 26 , 2022
Corporate America’s profit margins started strong and stayed high all throughout 2021. That’s according to financial data company FactSet. According to the firm, the second quarter of 2021 saw a 13.1% profit margin among the companies of the S&P 500. The 4th quarter showed a slight dip but a still-elevated […] 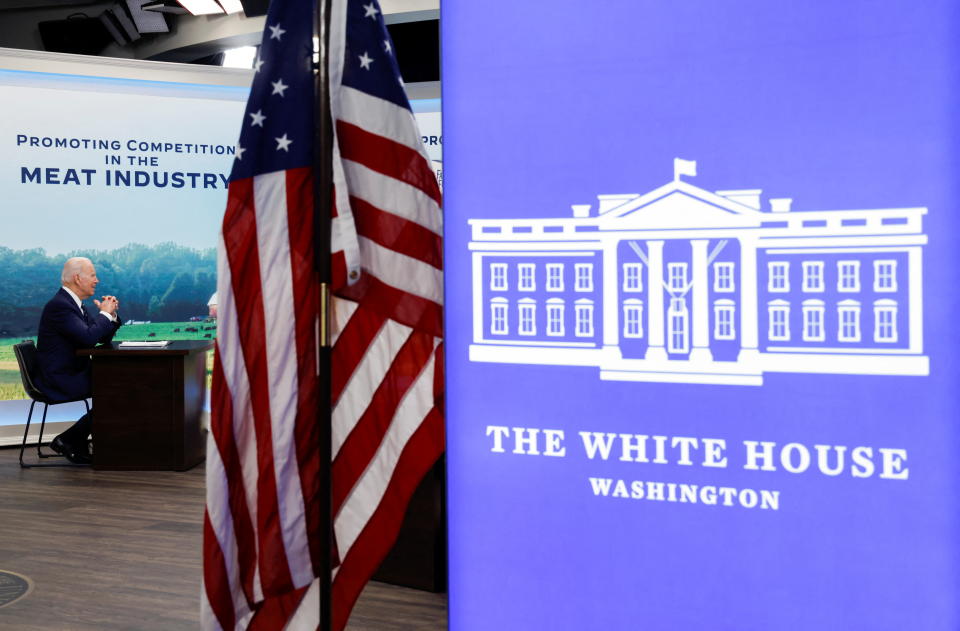