Stocks traded higher on Wednesday to extend gain from Tuesday’s session, when the major equity indexes rallied after three consecutive sessions of declines.

The S&P 500, Dow and Nasdaq rose in intraday trading after opening mixed, with the moves higher coming amid a slew of upbeat economic data. Third-quarter U.S. gross domestic product (GDP) was revised higher in the latest estimate from the Bureau of Economic Analysis to show a 2.3% annualized increase in economic activity from the 2.1% rise previously report. And consumer confidence jumped more than expected this month, and “expectations about short-term growth prospects improved” among Americans, according to the Conference Board’s latest report.

With trading volume relatively light during the holiday-shortened week, investors have also continued to assess a multitude of developments on the Omicron variant and its potential impact on economic activity. These updates have come alongside expectations for tighter monetary policy next year from the Federal Reserve.

Omicron has overtaken other coronavirus variants to become the dominant strain in the U.S., and now accounts for about three-quarters of new infections. Against this backdrop, President Joe Biden on Tuesday announced a series of new measures to address the virus, including opening additional federal COVID-19 testing and vaccination sites and sending 500 million at-home rapid tests to Americans for free beginning next month.

“But what we’re seeing in the action [Tuesday] is that, we’ve had three days of a sell-off. And some of that I think was overdone, especially in a lot of these areas that are positioned to do well in a reopening environment,” she added. “You have to have some money in the market in areas that should do well in that particular way. Airlines are one of those, cyclicals are more of those. When we look at the pattern in the market today, I think this makes sense for what’s ahead for the next 6 to 12 months.”

Other strategists agreed that investors should brace for more choppiness heading into the end of the year.

“I think you naturally are getting a little bit of this bounce after we’ve had a couple choppy sessions. But also the market is trying to price and digest the new information we’re getting here,” Anna Han, Wells Fargo securities equity strategist, told Yahoo Finance Live on Tuesday. “We had some news on Build Back Better getting delayed, we have more information on Omicron. These are the things you’re seeing combine with low liquidity as we get into year-end, so we’re not surprised to see the volatility.”

During a question and answer session during his remarks Tuesday, Biden said he and Senator Joe Manchin (D., W. Va.) were “going to get something done” on the White House’s about $1.8 trillion Build Back Better social policy bill. Manchin had told Fox News earlier this week he could not back the legislation in part given persistent inflation concerns, suggesting the bill would be scuttled in absence of support from the moderate Democratic lawmaker.

Pfizer (PFE) became the first drugmaker to receive authorization from the U.S. Food and Drug Administration for its COVID-19 pill, which will allow users to treat the coronavirus at home amid the spread of Omicron.

Based on Pfizer’s clinical trial data, the antiviral pill was 90% effective at preventing hospitalizations and deaths in high-risk patients. The FDA’s authorization allows those at least 12 years and older to receive treatment for COVID-19 through the pill outside of a hospital setting.

Stocks took a turn to the upside intraday on Wednesday, after data on U.S. GDP and consumer confidence each topped estimates.

Here’s where markets were trading Wednesday mid-morning in New York:

Sales of previously owned homes rose at a slower-than-anticipated rate last month, but still held up even as housing inventory remained lower and prices remained elevated.

Existing home sales increased by 1.9% to reach a seasonally adjusted annualized rate of 6.46 million units in November, the National Association of Realtors said Wednesday. Consensus economists were looking for a 2.9% increase, according to Bloomberg data. Existing home sales in October had risen at a 0.8% monthly rate.

Consumer confidence increased by a greater-than-expected margin in December, according to the Conference Board’s latest index.

The institution’s headline index crept higher to 115.8 in December, based on the latest release. This was above the 111.0 expected, according to Bloomberg consensus data. The index was upwardly revised to a reading of 111.9. in November from the 109.5 previously reported.

“Consumer confidence improved further in December, following a very modest gain in November,” Lynn Franco, senior director of economic indicators at The Conference Board, wrote in a press statement. “Expectations about short-term growth prospects improved, setting the stage for continued growth in early 2022. The proportion of consumers planning to purchase homes, automobiles, major appliances, and vacations over the next six months all increased.”

“Meanwhile, concerns about inflation declined after hitting a 13-year high last month as did concerns about COVID-19, despite reports of continued price increases and the emergence of the Omicron variant,” Franco added. Looking ahead to 2022, both confidence and consumer spending will continue to face headwinds from rising prices and an expected winter surge of the pandemic.”

Here’s where markets were trading just after the opening bell Wednesday morning:

U.S. gross domestic product increased at a 2.3% annualized rate during the July through September quarter, according to the third and final estimate from the Bureau of Economic Analysis.

This was upwardly revised from the 2.1% rise previously reported. Still, it marked a deceleration from the 6.7% jump posted in the second quarter, and 6.3% advance in GDP posted in the first three months of the year.

The upward revision to headline GDP came as personal consumption, the biggest contributor to domestic economic activity, rose 2.0%. This was greater than the 1.7% increase previously reported in the second estimate.

Core personal consumption expenditures — the Fed’s preferred inflation gauge — rose 4.6% on a quarter-over-quarter basis. This was also above the 5.9% quarterly increase previously reported.—

Here’s where markets were trading ahead of the opening bell Wednesday morning:

Here’s where markets were trading as the overnight session kicked off Tuesday evening:

Joe Manchin should run for president

Mon Dec 27 , 2021
Some Democrats despise him. Some Republicans lionize him. He seems to be pleasing all the wrong people, but this could make Democratic Sen. Joe Manchin of West Virginia exactly the type of purplish crossover politician voters would cheer as a 2024 presidential candidate. Manchin, of course, has gained fame and […] 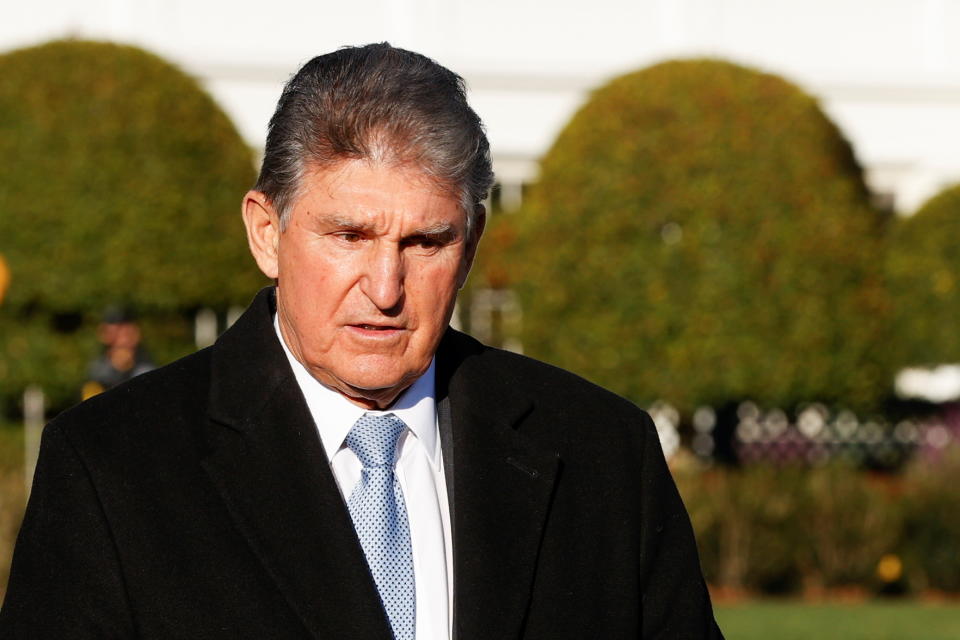