Stocks gained Wednesday morning to shake off some losses after a couple of volatile session on Wall Street. Investors looked to the Federal Reserve’s latest statement and press conference to remove some uncertainty on the outlook for monetary policy.

The S&P 500 rose by more than 1% just after the opening bell. The index closed lower for a fifth time in six sessions on Tuesday, extending volatility after Monday’s rollercoaster trading day. The Nasdaq gained more than 2%. Brent crude oil futures (BZ=F), the international standard in energy markets, jumped to more than $90 per barrel for the first time since 2014, with concerns over supply disruptions mounting as tensions between Russia and Ukraine mounted.

For markets, the Federal Reserve’s latest monetary policy statement and press conference from Fed Chair Jerome Powell later in the day will be the banner event. Investors have been pricing in a more aggressively hawkish central bank as the Fed works to rein in inflation currently running at a four-decade high. Over the past couple months, the Fed has signaled through its December meeting minutes and in public remarks that it will likely begin raising interest rates from current near-zero levels in March. It is also considering beginning to roll assets off its balance sheet after amassing some $9 trillion in its bond portfolio.

“If you think about what’s happened in the markets, it indicates the degree of sensitivity market participants have to what is going to be the new rate environment and the new liquidity environment,” David Bailin, Citi chief investment officer and head of Citi global wealth management, told Yahoo Finance Live on Tuesday.

“The Fed made a major reversal about five weeks ago when it said that it was both going to raise rates and also consider quantitative tightening, which effectively means that you and I are going to have to finance the debt that is necessary issued by the Treasury instead of the Fed,” he added. “So with all of that, I think they’re going to look at what happened [in markets] and they’re going to say, our goal here is not to shut the economy and to make things slow. The goal here is to signal their willingness to fight inflation to the extent that they can.”

Other strategists agreed that the Fed’s recent, more hawkish tilt has left investors so far with more questions than answers. While the Fed’s December projections suggested policymakers were likely to raise rates three times this year, many market participants have now priced in expectations for four hikes, while others have suggested as many as five or six hikes may be on the table given the current inflationary backdrop. And though Powell has suggested the Fed would continue contemplating quantitative tightening, the central bank has yet to offer a concrete timeline for the start of this process.

“We are in a period of heightened uncertainty,” John Bellows, Western Asset portfolio manager, told Yahoo Finance on Tuesday. “The market’s trying to figure out where that pivot ends, what eventually anchors Fed policy going. forward and it’s still trying to calibrate correctly the scale and magnitude of that Fed pivot.”

New home sales rose 11.9% on a month-over-month basis in December, the Commerce Department said Wednesday. This brought sales to a seasonally adjusted annualized rate of 811,000, or the most since March 2021. In November, new home sales had risen by 11.7%, with this figure downwardly revised from the 12.4% rate previously reported.

Here’s where markets were trading Wednesday morning just after the opening bell:

The U.S. goods trade gap yawned to a record high in December, unexpectedly soaring compared to the prior month as imports rose further.

Here’s where markets were trading Wednesday morning before the opening bell:

Stocks claw back losses to close out volatile day

Wed Jan 26 , 2022
Stocks clawed back losses on Monday as investors looked ahead to a busy week of corporate earnings results, economic data and a Federal Reserve monetary policy-setting meeting after an already volatile stretch of trading.  The Nasdaq Composite ended in slightly positive territory after dropping 4.9% at session lows. And earlier, […] 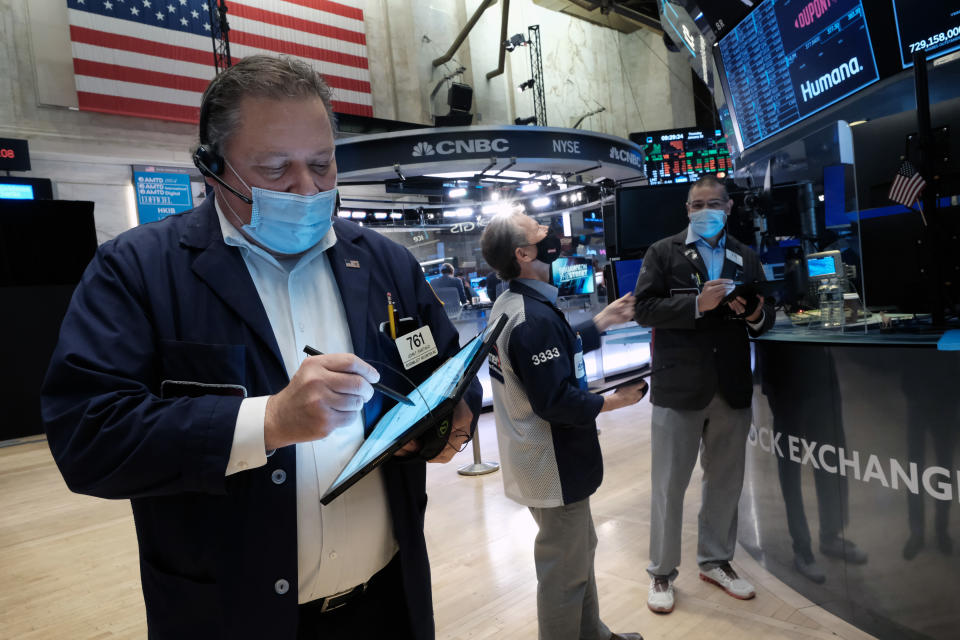