Stocks sank on Thursday in the final session of September and the third quarter, with stocks extending a weeks-long streak of volatility as concerns over inflation, the economic backdrop and debates in Washington over a host of measures weighed on equities.

The S&P 500 ended the day lower by 1.2%. The index fell by more than 4.5% in September for its first monthly decline since January, with concerns around fiscal and monetary policy, inflation, regulations in China and the ongoing pandemic all colliding to knock equities from their upward trajectory. Still, the S&P 500 remained up by about 15% for the year-to-date through Thursday’s close.

Cyclical stocks, though down during Thursday’s session, led the way higher in September as investors bet on higher inflation and rising rates. A jump in crude oil prices helped make the energy sector by far the best performer in the S&P 500. Financial stocks also outperformed, with rising Treasury yields serving as a tailwind to bank profitability.

The Nasdaq has underperformed over the past month as traders rotated away from the growth and technology stocks that pulled the market higher last year. High-flying technology stocks also got hit as Treasury yields jumped over the past week, with the rising borrowing costs weighing on the valuations of growth companies that rely heavily on expectations of strong future earnings.

“This feels a lot worse than it actually is because we haven’t had much volatility since last October, last September,” Paul Schatz, Heritage Capital President, told Yahoo Finance Live on Wednesday.

“But remember, all the reasons why we’re going down — nothing is new,” he added. “You’ve got the debt ceiling and the government shutdown and Evergrande and inflation. All known things. None of these are going to befall the bull market or cause a recession. There’s always some kind of short-term thing the market focuses on to get a pullback going. We’ve got it. I think it’s one you buy with both hands in the next week or so, and I think we’re going strongly to new highs in Q4.”

Other pundits, however, were less upbeat on stocks given the medley of concerns.

“We think there are several other headwinds, not directly related to [the Fed’s asset-purchase] tapering, that might weigh on the stock market for a while,” Thomas Mathews, markets economist for Capital Economics, wrote in a note on Wednesday. “Among other things, we think its valuation is already fairly stretched, that there is limited scope for further upward revisions to earnings estimates given how far they have come, and that long-dated bond yields may rise for other reasons than tapering.”

“As a result, we expect the U.S. stock market to make fairly limited gains over the next couple of years,” he added.

Thursday night also marks the deadline for Congress to come to an agreement to fund the government beyond the Sept. 30 fiscal year, or else risk a shutdown taking place beginning on Friday. The Senate and House of Representatives each passed a short-term appropriations bill Thursday afternoon to keep the government running through Dec. 3, and have sent the legislation to President Joe Biden for approval.

Even given the run-up in Treasury yields over the past week, rates still remain relatively low on a historical basis, largely supported by the Federal Reserve’s still-accommodative monetary policies. This has, in turn, helped support corporate borrowing and deal-making.

“Interest rates continue to be very attractive. We’re all watching the Fed and have an expectation that rates will rise. So I think companies are really going to market to take advantage of very positive conditions right now,” Suzanne Shank, president and CEO of Siebert Williams Shank, said during an episode of Yahoo Finance Influencers.

These conditions have also helped create a constructive backdrop for burgeoning companies looking to hit the public markets. The second quarter of 2021 was the biggest quarter for initial public offerings in terms of number of deals and total proceeds, according to data from Renaissance Capital.

“I think low interest rates have pushed up valuations for growth companies, and the hundreds of unicorns in the pipeline are looking to take advantage of that,” she added. “And I think we’re seeing companies that both benefited from the pandemic as well as those that are sort of rebooting post-pandemic that have really been sparking this increased deal flow. Earlier in the year, inflation concerns had investors worried that the Federal Reserve might change in policy. But after the Fed said that inflation wouldn’t change over the long-term, it’s really been robust IPO time.”

The three major indexes sank in intraday trading, led by a drop in the cyclical areas of the market most sensitive to economic conditions. The Dow, which contains a number of energy, financial and other cyclical stocks, dropped 400 points, or over 1%.

The communication services and information technology sectors outperformed in the S&P 500, though all 11 major sectors were in the red. Consumer staples and industrials lagged.

September has seen a swift rotation away from growth stocks that had led the market higher throughout 2020. According to at least one strategist, the biggest opportunity for investors is to continue looking away from growth and focusing on value stocks still underpriced by the market.

“The market is very fully priced, value stocks are not,” Rob Arnott, founder of Research Affiliates, told Yahoo Finance Live on Thursday. He suggested value stocks could return 5% or more over the market over the next five to 10 years.

“One thing people forget is, just like a stock can go up and down relative to its fundamentals, a strategy can too,” he said. “And so value stocks were priced back in 2007 about one-fourth as expensive as growth stocks: A four-to-one ratio. They tumbled. By August of 2020, they had fallen to one-thirteenth the price of growth stocks, cheapening by 70% relative to growth, but underperforming by 58%.”

“It’s a huge shortfall. But it’s smaller than the amount by which they got cheaper,” he added. “If they rebound back to a four-to-one ratio, you would see value outperform growth by upwards of 200%. So that’s what we’re looking at in terms of the magnitude of the rout for value investing.”

Stocks have come down sharply in September as a medley of concerns on inflation and the economic recovery, debates among Washington lawmakers, and the ongoing pandemic all came together. These issues could generate more choppiness in an equity market that has already run up more than 16% so far this year, according to some strategists.

“We’ve got a market priced for perfection. The cyclically adjusted PE [price-to-earnings] ratio is at 38.3. Now that’s really high on a historical basis. So that means that stocks are priced for a lot of growth going forward. And there’s a lot to get through,” Leonore Elle Hawkins, chief macro strategist for Tematica Research, told Yahoo Finance Live on Thursday.

A Beijing court ordered Tesla (TSLA) to pay $235,000 in damages to a Chinese driver, who sued the electric car-maker over a purchase of a used Model S vehicle, according to a report from Bloomberg on Thursday. The court said Tesla had misrepresented the condition of the Model S vehicle sold to the drive.

The penalty marked a blow for the car-maker, which has faced a string of regulatory and safety concerns in both the U.S. and China in recent months. China has also been a critical electric-vehicle market for Tesla and its competitors.

Shares of Tesla were little changed to slightly higher during intraday trading on Thursday. Shares have risen 6.2% over the past month, outperforming the S&P 500, which has fallen 3.5%.

Here’s where the three major indexes were trading shortly after the opening bell:

U.S. economic output was upwardly revised for the April through June quarter, according to the Bureau of Economic Analysis’ (BEA) third revision on domestic GDP.

“Upward revisions to personal consumption expenditures (PCE), exports, and private inventory investment were partly offset by an upward revision to imports, which are a subtraction in the calculation of GDP,” the BEA said in its report Thursday.

The number of individuals filing first-time unemployment claims unexpectedly rose last week, signaling some slowing in the labor market’s recovery even as companies across industries looked to bring on more workers to fill vacancies.

New jobless claims came in at 362,000 for the week ended Sept. 25, according to Labor Department data Thursday morning. That was above the 330,000 consensus economists expected, and grew from the unrevised 351,000 filings posted during the prior week.

This week’s report was also the first to account for the national federal expiration of enhanced unemployment benefits, which took place Sept. 6. As of the latest data, just over 5 million individuals were claiming benefits across all programs for the week ended September 11. That compared to 11.3 million individuals on state and federal unemployment programs as of the week ended Sept. 4.

Here’s where markets were trading ahead of the opening bell:

Here were the main moves in markets as of Wednesday evening:

‘A win for Pakistan’: Imran Khan gambles on Taliban ties

Fri Oct 1 , 2021
“Taliban Khan” got the last laugh. Pakistan’s Prime Minister Imran Khan appears vindicated by the Taliban takeover in Afghanistan. The charismatic former cricket star and playboy had for years criticised the US invasion of Afghanistan, using anti-American messaging that found an audience beyond hardline Islamists in his own country. Long […] 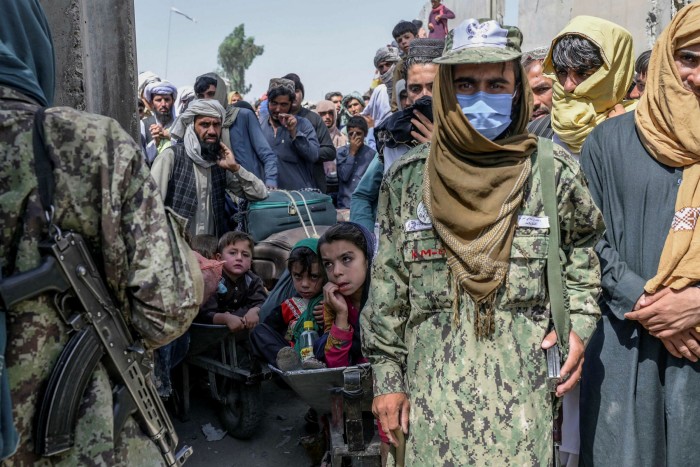