[Click here to read how stocks are trading heading into Friday, February 25]

President Joe Biden in a speech Thursday unveiled another tranche of sanctions against Russia in condemnation of its attack on Ukraine meant to “impose severe cost on the Russian economy, both immediately and over time.” The action builds on a first batch of financial sanctions announced Tuesday targeting Russian financial institutions, sovereign debt and oligarchs in the country.

“Putin is the aggressor,” Biden said in his speech. “Putin chose this war, and now he and his country will bear the consequences.”

“Putin knew these were going to be coming,” CSIS International Security Program senior adviser Mark Cancian told Yahoo Finance Live. “He took his move anyway, so it’s unlikely that they will deter him.”

Volatility across global equities prompted investors to buy up safe-haven plays amid a broader risk-off trade worldwide earlier in the day. However, gold futures erased 3.5% gain to drop as much as 1.7% into close. WTI crude oil came close to wiping out a 9.2% advance after jumping to over $100 per barrel for the first time since July 2014

In the U.S., the conflict creates an added headwind for investors already grappling with a hawkish shift in Federal Reserve policy to intervene more aggressively in mitigating inflationary pressures. The war between Russia and Ukraine threatens to exacerbate already surging prices and spur other economic disruptions that could complicate the Fed’s policy-making choices.

“Energy prices have surged and the threat of a supply shock in oil places further burdens on discretionary consumption, possibly weighing on growth and complicating the Federal Reserve’s plans to combat inflation by raising interest rates,” Lynch wrote. “A 50-basis point move at the March meeting now seems unlikely.

Many strategists have argued that despite the weight of geopolitical turmoil on equities, the risk-off mood among traders stems primarily from worries around interest rate hikes.

“So far, it looks like Ukraine is not the reason for the drop, despite the fears,” Commonwealth Financial Network Chief Investment Officer Brad McMillan said in a note.

“But what has pulled the markets down, if not the Ukraine crisis?” McMillan wrote. “The most likely candidate—one which makes both fundamental and mathematical sense — is higher interest rates”

“After adjusting for earnings beats this quarter, that drop in valuations pretty much explains the drop in the market, and that rationale doesn’t leave much, if any, room for worries about Ukraine,” McMillan noted. “Wall Street, then, seems to be much more worried about Fed Chairman Jay Powell than Vladimir Putin, at least at the moment.”

Here were the main moves in markets as of close on Thursday:

The Securities and Exchange Commission has initiated a probe into whether stock sales by Tesla Inc. (TSLA) Chief Executive Elon Musk and his brother violated insider trading rules, according to a report by the Wall Street Journal that cited people familiar with the matter.

The watchdog’s investigation began last year after the Tesla leader’s brother Kimbal Musk sold $108 million worth of company shares the day before Elon Musk tweeted a poll asking whether he should sell 10% of his stake in Tesla.

Elon framed the potential sale as a way to cover taxes he would owe if lawmakers imposed new taxes on unrealized capital gains. Musk began selling billions of dollars worth of Tesla shares in the days following his tweet.

Prime Minister Boris Johnson unveiled Britain’s largest-ever package of sanctions against Russia as the West responds to the Kremlin’s invasion of Ukraine.

“This hideous and barbarous venture of Vladimir Putin must end in failure,” Johnson told parliament Thursday. “For our part today, the UK is announcing the largest and most severe package of economic sanctions that Russia has ever seen.”

President Joe Biden is expected to unveil new sanctions against Russia on Thursday after Moscow launched a full-scale military attack on Ukraine, triggering condemnation and financial penalties from the United States and European allies.

The president is scheduled to announce the new measures at 1:30 p.m. ET, according to the White House.

Biden met with G7 allies Thursday to plan measures against Russia after the Kremlin initiated what the president deemed “a premeditated war” against Ukraine.

Mortgage rates slipped this week as U.S. Treasuries were weighed down by Russia’s invasion of Ukraine.

Mortgage rates have surged roughly 84 basis points since December, leading to a decline in applications for home lending.

“Even with this week’s decline, mortgage rates have increased more than a full percentage over the last six months,” Freddie Mac chief economist Sam Khater said. “Overall economic growth remains strong, but rising inflation is already impacting consumer sentiment, which has declined in recent months. As we enter the spring homebuying season with higher mortgage rates and continued low inventory, we expect home price growth to remain firm before cooling off later this year.”

Economists surveyed by Bloomberg projected a print of 802,000. Drops in sales occurred mainly in the Midwest, Northeast and the South, while increasing in the western part of the country.

The sell-off in Russian stocks Thursday following its military invasion of Ukraine marked the third-worst plunge in market history in local currency terms as, according to Bloomberg data.

The benchmark MOEX Russia Index traded 38% lower as of 5:28 p.m. in Moscow, wiping out more than $200 billion in shareholder assets as Western leaders condemned the Kremlin and vowed to take action against the country.

According to Bloomberg’s analysis of historical figures, this is the first time since 1987 that such a large selloff has hit a market bigger than $50 billion.

The Labor Department most recent weekly jobless claims report showed 232,000 Americans filed for unemployment in the week ended Feb 19., down from a revised 249,000 during the prior period. Economists surveyed by Bloomberg projected a read of 235,000, according to consensus data.

Prior to the latest figure, jobless claims ticked up slightly after a consistent decline that signaled Omicron-related pressures on the labor market were beginning to abate following a temporary surge in mid-January to a print of nearly 300,000.

“Ongoing issues with labor supply has led companies to increase retention rates, which has contributed to the low level of jobless claims,” Bank of America economists wrote in a note published Friday. “We expect this to persist over the course of the year.”

Here were the main moves in markets in pre-market trading Thursday:

Here were the main moves in markets in extended trading Wednesday:

Can you finance an engagement ring with bad credit?

Mon Feb 28 , 2022
Our goal here at Credible Operations, Inc., NMLS Number 1681276, referred to as “Credible” below, is to give you the tools and confidence you need to improve your finances. Although we do promote products from our partner lenders who compensate us for our services, all opinions are our own. You […] 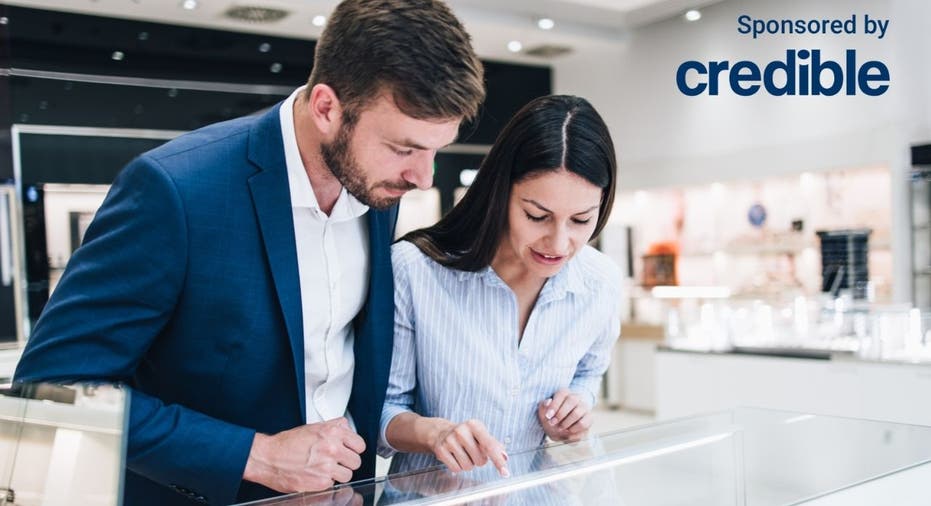