The US has drawn up sanctions targeting Vladimir Putin’s inner circle and its ties to the west as Washington broadens the list of financial penalties it and European allies will impose if Russia invades Ukraine.

The move comes as the UK vowed on Monday to introduce new legislation strengthening London’s ability to target Kremlin-linked businesses and their owners in the country in case of Russian aggression on Ukraine.

Senior US administration officials told the Financial Times that a list of individuals and family members that would be hit with sanctions had been developed in co-ordination with US allies as part of the effort to punish the Russian president in the event of an attack.

“The individuals we have identified are in or near the inner circles of the Kremlin and play a role in government decision making or are at a minimum complicit in the Kremlin’s destabilising behaviour,” the US officials said.

The administration officials did not name the Russian oligarchs and family members in question but said that many were “particularly vulnerable targets because of their deepened financial ties with the west”.

“Sanctions would cut them off from the international financial system and ensure that they and their family members will no longer be able to enjoy the perks of parking their money in the west and attending elite western universities,” the senior Biden administration officials said.

The measures to target Russian oligarchs would come in addition to broader sanctions against sectors of Russia’s economy, including banking and energy, that the US and its allies have been discussing for weeks.

On Monday, British government officials said that, under new legislation, the UK would be able to act in “lockstep with the US and other allies to freeze assets and ban travel”.

In Washington, senior Biden administration officials said the targets had been chosen among Russian leaders, officials, senior executive officers or members of the boards of directors of state-owned companies. They could be operating in “any sector of the Russian economy as identified by the Secretary of the Treasury”, and extended to spouses and children.

The US officials said some of the individuals were selected from a classified list of senior political figures and Russian oligarchs sent to Congress by the Treasury department in 2018, known as Section 241 of the Countering America’s Adversaries Through Sanctions Act, a law enacted in 2017.

“Putin’s cronies will no longer be able to use their spouses or other family members as proxies to evade sanctions,” the senior administration officials said. 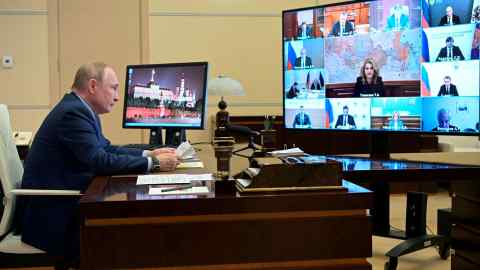 The UK’s parallel effort focusing on oligarchs will be particularly important to the US given that many members of the Russian elite have assets and other financial ties in Britain.

“The US and UK are in lockstep and we are prepared — in co-ordination with other allies and partners — to impose massive costs if Russia further invades Ukraine. Russia knows that. We welcome the UK’s strong partnership on enforcing existing sanctions for malicious activity and in preparing packages of strong economic measures to deter further Russian aggression,” a spokesperson for the White House’s National Security Council told the Financial Times.

The penalties against Russia’s elite do not preclude Washington from imposing sanctions that directly target Putin, which Biden said was a possibility last week.

“This is not the exhaustive list of costs we will impose. All options remain on the table,” the senior administration officials said.

Americans Across Party Lines Are Feeling the Effects of Inflation: Survey | Economy

Tue Feb 1 , 2022
Nearly 8 in 10 Americans expect inflation to increase over the next six months, according to a Gallup poll released Wednesday, suggesting that an issue predominantly emphasized by Republicans that has loomed large over the Biden administration is perhaps crossing party lines. Although Americans typically predict rising inflation, it’s unusual […]