Global stocks staged a ferocious rebound from the war-induced rout, with European equities notching the biggest rally since the pandemic bottom in March 2020 and U.S. shares jumping the most intraday since November of that year. Oil sank more than 10% and Treasuries dropped.

Dip buyers powered the S&P 500 up almost 3% and Germany’s DAX Index to an eye-popping 7.9% surge on speculation that two weeks of selling amply reflected the global economic impact of escalating sanctions on Russia. Oil slid below $110 a barrel in New York and the 10-year Treasury yield climbed back above 1.9%.

Still, the rallies managed to claw back only some of the losses incurred since Russia invaded Ukraine. The DAX had plunged into a bear market earlier this week, while the S&P 500 is still sitting 10% below where it started the year. West Texas crude has added almost $20 a barrel in two weeks, and other commodities from nickel to wheat remain near historically high prices.

The risk-on rally is the latest wild ride for markets have been roiled by fears of a global inflation shock from a commodity-price rally fueled by Russia’s isolation, while supply disruptions threaten to usher in a period of slower global growth. Sentiment was lifted Wednesday after a top foreign policy aide to Ukrainian President Volodymyr Zelenskiy said the country is open to discussing Russia’s demand of neutrality as long as it’s given security guarantees.

“Risk markets are higher today, suggesting traders are no longer in flight mode and are starting to think about value again,” said Chris Low, chief economist at FHN Financial. “That doesn’t mean volatility is over. Economic consequences, macro and micro, are still in flux. The West is still working on sanctions for Russian energy, and the duration and outcome of the war is still a big unknown.”

The rally in U.S. stocks Wednesday comes on the 13th anniversary since the S&P 500 bottomed out following the financial crisis. The gauge has climbed more than 500% in this bull market, with an annual return of about 15%. 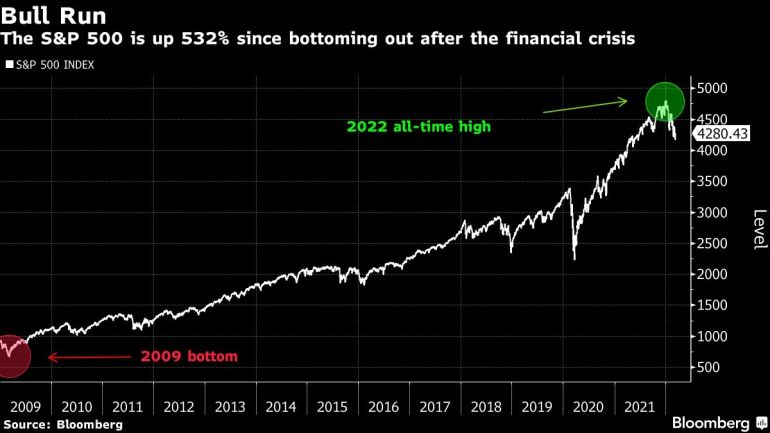 Russian forces intensified their bombardment of Ukraine’s capital Kyiv, the U.S. said. The Russian stock market’s trading halt is being extended in an effort to keep prices from tumbling in the wake of vast international sanctions.

Meanwhile, Coca-Cola Co. joined McDonald’s Corp., Starbucks Corp. and a host of other companies in suspending Russia operations in protest at the war. Fitch Ratings cut Russia’s credit rating and said a bond default is “imminent.”

Oil tumbled as the U.A.E. and Iraq signaled OPEC may have greater willingness to raise output. Crude has posted huge intraday swings in recent days as Russia’s invasion of Ukraine threatens a major global supply shock. Declines in crude and gas Wednesday are reversing some of the main trades seen since war broke out.

“What we’re seeing today is a lot of focus on commodity prices,” Michelle Cluver, associate portfolio strategist at Global X, said in a phone interview. “We are also seeing, especially with what’s happened with banning energy imports from Russia, the question about economic growth increasingly coming to the forefront.” 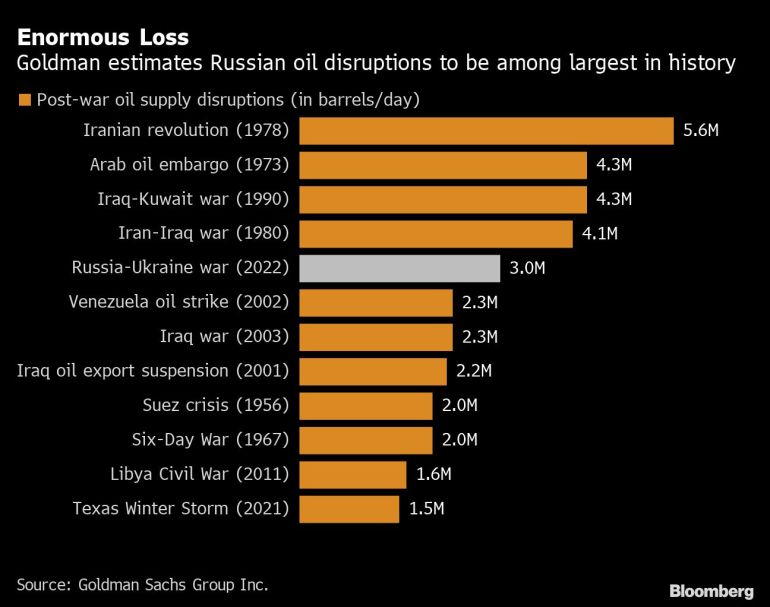 Commodity costs underline the inflation challenge and growth dilemma facing central banks. The European Central Bank meeting Thursday may reflect caution as the war on Ukraine has upended the continent’s economic outlook, while bets on a Federal Reserve rate hike have been scaled back over the past few weeks, with a quarter point now widely expected. Still, with U.S. inflation data due Thursday set to capture prewar prices, economists are now saying it could peak somewhere in the 8%-9% range this month or next.

Commodities broadly pulled back from highs, with gold dropping from a 19-month high on improved risk sentiment. Bullion is still up 9% this year as investors seek a hedge against the threat of an inflationary shock.

In cryptocurrencies, Bitcoin jumped above $42,000 amid a sharp rally in digital tokens, spurred by optimism about an impending U.S. overhaul of crypto oversight that Treasury Secretary Janet Yellen called “historic.”

Here are some key events this week:

Some of the main moves in markets: